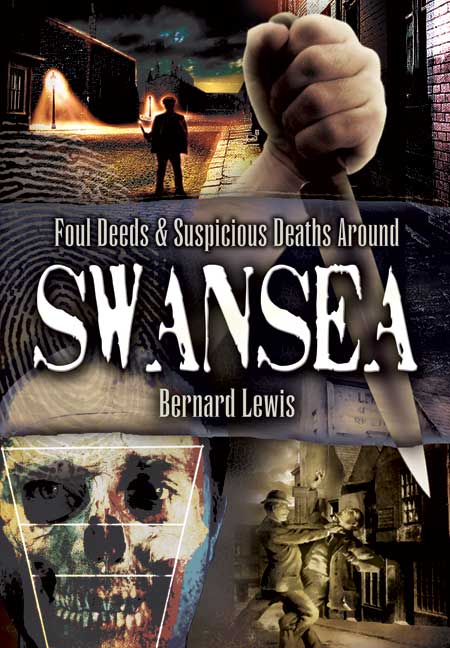 Foul Deeds and Suspicious Deaths in Around Swansea (Kindle)

Click here for help on how to download our eBooks
Add to Basket
Add to Wishlist
You'll be £4.99 closer to your next £10.00 credit when you purchase Foul Deeds and Suspicious Deaths in Around Swansea. What's this?
Need a currency converter? Check XE.com for live rates

The criminal cases vividly described by Bernard Lewis in this gripping book take the reader on a journey into the dark secret side of Swansea’s long history. The city has been the setting for a series of horrific, bloody, sometimes bizarre incidents over the centuries. From crimes of brutal premeditation to those born of rage or despair, the whole range of human weakness and wickedness is represented here. There are tales of secret passion and betrayal, robbery, murder and suicide, deadly fever and mutiny, executions, and instances of extraordinary domestic cruelty and malice that ended in death. The human dramas the author describes are often played out in the most commonplace of circumstances, but others are so odd as to be stranger than fiction. This grisly chronicle of the hidden history of Swansea will be compelling reading for anyone who is interested in the dark side of human nature.

Swansea-born Bernard Lewis is a leading local historian who has trawled through the archives to throw some light on some very dark places in the history of the city.

Lewis begins at the beginning which is exactly what one would expect in a book set in and around Swansea. In the opening chapter, he gives an overview that runs from medieval times to the reign of Queen Victoria. They were tough times made tougher by rough and brutal men where life was cheap and there was a perpetual state of war between the native Welsh and Norman overlords. Much of this was centred on Swansea and Oystermouth castles both at one time in the hands of ""a licentious clan of freebooters, the de Breoses."

Moving through the years and chapter headings Lewis examines the career of the snake oil salesman Baron Spolasco and his so-called miraculous cures; the fighting Welsh and the killing of John Bowling; the fighting Irish and two dead Welshmen; and the Rebecca Rioters at Pontarddulai.

Although dealing with dark days and human misdeeds the stories are never less than fascinating.