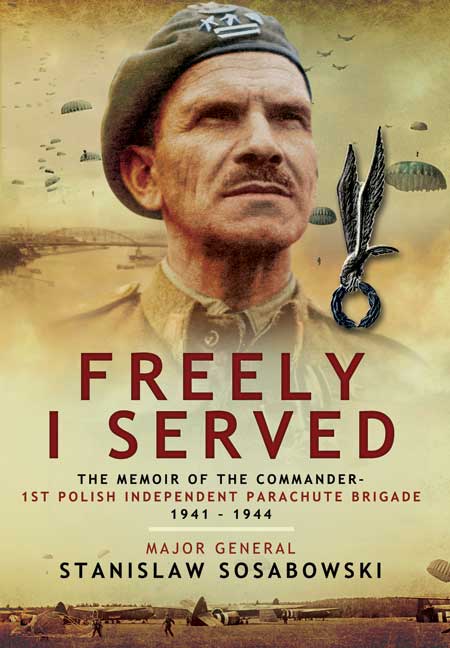 The Memoir of the Commander, 1st Polish Independent Parachute Brigade, 1941–1944

Click here for help on how to download our eBooks
Add to Basket
Add to Wishlist
You'll be £4.99 closer to your next £10.00 credit when you purchase Freely I Served. What's this?
Need a currency converter? Check XE.com for live rates

After seeing service with the Austrian Army in World War I, the author joined the newly created Polish Army in 1918. By September 1939 he was commanding 21st Infantry Regiment in the Battle of Warsaw against overwhelming German forces. Taken prisoner, he escaped to join the Polish Army in France before evacuating to England.

In 1941 he formed the First Polish Independent Parachute Brigade and trained and commanded it for the next three years. While created for the liberation of Poland, the Brigade and the author parachuted into Arnhem in September 1944 and fought with great courage.

His frank style and opinions resulted in major disagreements with his British senior officers such as Boy Browning and he was forced to resign.

Freely I Served is both a personal memoir and a tribute to the many brave Polish soldiers who fought to regain their country from occupation. An inspiring and revealing book.

Sosabowski’s memoir is powerfully written and the reader gets a real sense of his love of country and concern for his men.

Major General Stanislaw Sosabowski was the commander of the 1st Polish Independent Parachute Brigade, one of the airborne units committed to the fighting at Arnhem during Operation Market Garden... This text makes it clear why Sosabowski was considered to be difficult to work with, and why some of his British colleagues were suspicious of his commitment at Arnhem.

Autobiographies have many purposes. They allow us a window into the lives of the great and the good where we learn how it was to be that person. Sometimes they can be exercises in self justification and not really serve the writer well in the long run. This superb book is a chance for the author to set the record straight. It does a good job and goes some way to restoring the reputation of a thoroughly decent soldier. While his career is genuinely interesting and his passion and patriotism shine through, the real meat is about Market-Garden and his relationship with British generals.

This is a thoroughly enjoyable and fast paced book written by one of the most fascinating characters of the story of the North-West Europe campaign. I warmed to him immensely and I don’t think it really needs hindsight to see that he was ill-served by his allies. His political masters were railroaded into shafting him and I have some sympathy with them. It would be a happier story had Poland been truly liberated at the end of the war, but it wasn’t and, for me, one of the saddest sights of recent years was the line of Polish graves at Oosterbeek, which illustrate the tragedy of post war politics.  Britain went to war for Poland and yet the Poles were barred from marching in the great London victory parade of 1946 to appease Moscow.

This ranks as one of my favourite personal accounts of the war.

This is the biography of a professional soldier who served in the Austrian army in WWI, joined the Polish Army on its formation in the newly independent Polish nation, escaped the German invasion and arrived in Britain to form a parachute brigade and fight with great personal bravery.

Readers will find this a revealing account and an essential part of the Arnhem story.

Freely I Served is the memoirs of Major General Stanislaw Sosabowski who was the commander of the 1st Polish Independent Parachute Brigade who jumped at Arnhem and who was unfairly blamed for the debacle by Monty and General Browning. Hence the reason why most Polish soldiers, and especially the paratrooper veterans, held no respect for Monty after the war. My Grandfather like Stanislaw Sosabowski was from Eastern Poland, the Kresy, which underwent ethnic cleansing twice by the Russians who removed the Poles and the Nazis who wiped out the Jewish communities.

This book was written before Sosabowski’s death in 1967 while Poland was occupied by the Soviets and some of the names of the Underground Army contacts full names were not given as he understood this would have meant their arrest even then. Like his many comrades he was unable to return to Poland when demobbed in 1948 as he would have faced immediate arrest and probable execution as an enemy of the state – according to the Communists.

Born in 1892 Stanislav Sosabowski fought in The Great War with the Austrian Army before joining the new Polish Army in 1918. His service during the Second World War is recounted in this book. Post-war he was active in Veteran affairs. He died in Warsaw in 1967.