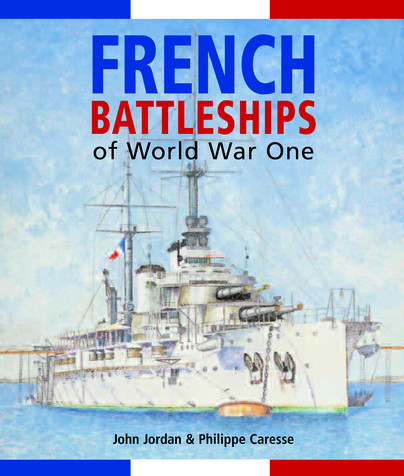 Add to Basket
Add to Wishlist
You'll be £40.00 closer to your next £10.00 credit when you purchase French Battleships of World War One. What's this?
+£4.50 UK Delivery or free UK delivery if order is over £35
(click here for international delivery rates)

When war broke out in August 1914 France had only two dreadnoughts in service, with a second pair running trials. The main body of the elite Armée Navale was made up of the eleven battleships of the Patrie and Danton classes, both of which were intermediate designs with two main gun calibres. Older ships included survivors of the notorious Flotte d’echantillons ('fleet of samples') of the 1890 programme and their successors designed during the 1890s.

This book traces the development of French battleships from 1890 to 1922, and also covers the extensive modifications made to the survivors during the interwar period. The structure follows that of previous books in this highly successful series, with Part I by John Jordan devoted to design, followed by historical chapters by Philippe Caresse covering 1900 to 1945. It is liberally illustrated throughout with line drawings and labelled schematics, plus photographs from the extensive Caresse collection, many of which are previously unpublished.

This is the most comprehensive account of these ships published in English or in French, and is destined be the standard reference for many years to come.

This book guarantees much and long reading and viewing pleasure.

As a straight design history, French Battleships of World War One is a valuable addition to the naval historian’s bookshelf. The photographs, particularly of vessels under construction and analysis of the Marine Nationale’s evolving fire control systems are themselves worth the cost of the book.

This is a book full of great detail, clearly the result of much research, with the interesting addition of contemporary water colours, and one to be recommended to the serious historian and warship enthusiast alike.

The most detailed and comprehensive work yet published on its subject in either English or French, and has at one stroke become the standard reference work on the major French capital ships of this period.

Liberally illustrated throughout with line drawings and labelled schematics, plus photographs from the extensive Caresse collection, many of which are previously unpublished. This book, which is destined to become the standard work on the subject, is one of those must have books and is highly recommended.

It may come as a surprise to find just how many French battleships were lost to magazine explosions before 1914. The wartime service is especially informative and detailed, and contains several stories of extreme heroism from crews in appalling situations. The Dardanelles campaign receives a lot of attention as would be expected. The production of this book is of the highest quality, being printed on slightly glossy paper, allowing the photographs and drawings to appear at their best.
I recommend this book to any naval enthusiast.

This is a beautiful detailed book, with great quality printing and reproduction.

It is, simply, wonderful. French World War One Battleships were perhaps the most stylish, certainly the most distinctive of the period. The large tumblehome, pronounced “ramming” bows and the eccentric grouping of funnels give French Battleships of the First World War such a unique look that it is impossible to mistake them for any other’s battleships...

If I had to give this book a rating out of five stars, then I would not hesitate to give it 5-stars. Did I mention that it is wonderful?

As the war wore on the French battleships had little to do in the Adriatic which led to personnel morale problems. The French battleships suffered in the Second World War notably through the British bombardment at Mers El-Kebir in July 1940 and the scuttling of the fleet, which included the battleship PROVENCE, at Toulon in November 1942 to avoid a German takeover of the fleet.
‘French Battleships of World War One’ is not just a peerless study of these important ships but it can also be set in the wider context of French 20th century history by adding to that nation’s military historiography of accomplishments and setbacks. The book is highly recommended.

At the opening of WW1 France has one of the largest Navies in the world. Although in numbers it was very strong, years of focusing on other priorities had left France with a Navy built on a bewildering range of designs and ages and only 4 of her prewar total of 19 battleships were dreadnoughts. This book then has a huge task ahead of it to cover this massive variety in one tome. But it succeeds admirably.

The book is broken down into two sections; "Technical Section" and "Historical Section". Section 1 is a technical look at all the ships and classes and section 2 is as the title suggests, their historical appearances and roles in the conflict with a postscript on the interwar period and WW2.

Covered in section 1: 'A prehistory 1870 to 1890' which gives background context, then 'The Flotte d'Enchantillons' (the Fleet of Samples) covers the period of experimentation that lead to many classes of one and many odd and famous vessels, then the Charlemange Class, Iena and Suffren, The Patrie Classm Danton Class, Courbet Class, Bretagne Class, Normandie Class and the projects of 1913.

The book is illustrated throughout with period photos and numerous plans and technical drawings. Most of this is in black and white but there is a large section of colour paintings by Jean Blade. There are numerous things here that will appeal to modellers; such as the table of turret markings and the appendix on paint schemes.

There have been precious few books on the French Navy and it's battleships prior to WW2 in English and very few in French with this breadth of scope. An essential addition to the library of anyone interested in French warships of the Pre-dreadnought era to WW1.

Can not be missed in the library of any enthusiast-history and naval technique of the twentieth century of the French Navy in particular.

The larger format naval history with a high image content of photographs and drawings that the publisher excels at. – This is a well researched, and nicely illustrated book covering battleships that the French Navy had available in 1914-1918 – Highly Recommended.

This book traces the development of French battleships from 1890 to 1922, and also covers the extensive modifications made to the survivors during the interwar period. It is liberally illustrated throughout with line drawings and labelled schematics, plus photographs from the extensive Caresse collection, many of which are previously unpublished.