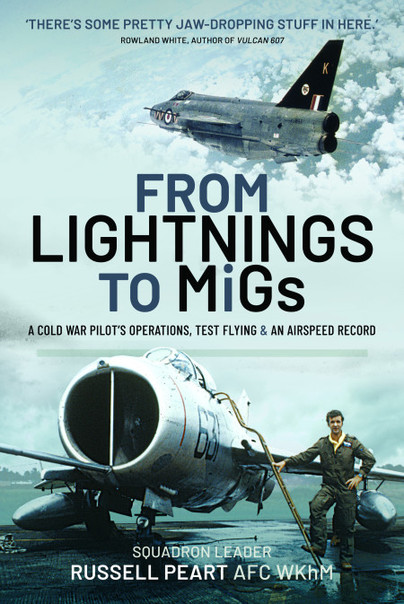 From Lightnings to MiGs (Kindle)

You'll be £4.99 closer to your next £10.00 credit when you purchase From Lightnings to MiGs. What's this?
Need a currency converter? Check XE.com for live rates

The author's account is at all times readable, well-presented and engaging, with plenty of personal asides and anecdotes along the way.

From Lightnings to MiGs is a very readable account of a unique flying career, profusely illustrated with original photographs they serve to illustrate many of the events described in this excellent book.

Russ Peart’s autobiography which is both absorbing and highly entertaining. With comprehensive annexes, it is one of the most informative of several similar autobiographies from Pen and Sword so I have no hesitation in recommending From Lightnings to MiGs as an engrossing and enjoyable read for anyone with an interest in military aviation.

The writing style is easy to read and keeps your attention. With hobbies he had the chance to do, both racing yachts and cars, it might be considered a good example of 'boys toys', but he was clearly a very professional pilot, who loved his job. Any fan of Cold War aircraft will thoroughly enjoy this book I have no doubt, and I am sure it will inspire some youngsters to want to choose flying as a career, whether it is airliners such as Russell's own son chose, or whether it is to fly fast jets for the RAF. Easily recommended for any aviation fan.