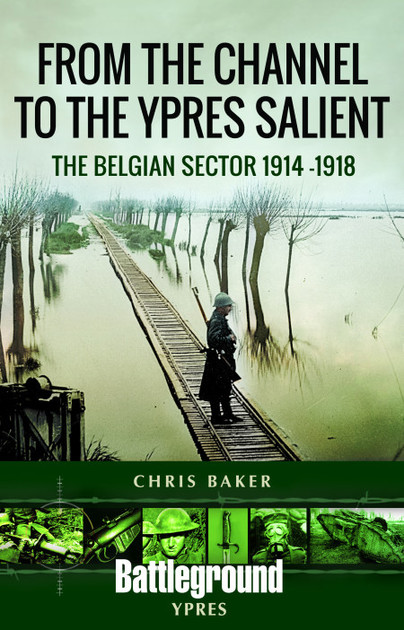 From the Channel to the Ypres Salient (Kindle)

Click here for help on how to download our eBooks
Add to Basket
Add to Wishlist
You'll be £4.99 closer to your next £10.00 credit when you purchase From the Channel to the Ypres Salient. What's this?
Need a currency converter? Check XE.com for live rates

The sector north of Ypres is best known for the inundation of much of the ground to the east of the Yser that acted as a block to the German advance in the autumn of 1914. From that time on military activities were extremely limited. Much of this line was manned by Belgian troops, with some assistance from the French army at its southern end and of the British army on the Channel coast.

The role of the Belgian army in the Great War is little known, apart from the opening months, when 'brave little Belgium' held on to its important fortified cities, notably Liege and Antwerp, for longer than German planning had anticipated. It was not until mid October 1914 that the Belgian army was forced back to the area of the Yser, when its defences were bolstered by French troops whilst Haig's I Corps came up on its southern flank.

At this crucial phase of the campaign, the harsh decision was taken to open the dykes at the end of October 1914 and thereby flooding much of the low lying ground east of the Yser and so effectively halting major German offensive operations.

For almost four years the Belgian army rested reasonably secure behind this sodden landscape, although certain key points were the scene of frequent, if limited, tussles. 'Free' Belgium was reduced to two significant towns that could be regarded as secure and out of the range of most German artillery - the coastal resort of La Panne (De Panne) and the much bigger settlement of Furnes (Veurne),

Over these years the Belgian army was rebuilt under the dynamic leadership of the king, Albert I, and by the time of the general allied advance in September 1918, the Belgian army was able to take its place in the Advance to Victory, in an allied Army that was commanded by King Albert. Although this phase of the war is outside the scope of the book, it is important to realise that the Belgian army was a very active player in these last few months. Amongst the achievements of Belgian troops at this stage of the war was the final capture of Passchendaele.

This book concerns itself with the years of defence and the reconstruction of the army behind the Yser. Relatively little of Belgium's efforts in the Great War remained, but recent years have seen action to preserve what does. Most significant of these, perhaps, is the so called Trench of Death near Diksmuide. Although always preserved, it has recently been very successfully refurbished and is now most effectively and informatively presented. Other remains from the war have also been developed so as to be more informative and the result is that touring this area provides a fascinating insight into one of the most unusual sectors of the Western Front and which is conveniently close to the much visited Ypres Salient.

In this book Chris Baker brings his extensive knowledge of the Belgian army (helped by his ability to read French and Dutch) and of the Flanders region to produce a much needed insight into Belgium's army role for most of the war as the protector of the northern flank of the whole of the Allied line.


This work by Chris Baker breaks new ground in the coverage of the First World War through Battleground Europe, with a focus on the experience of the Belgian army. The geographical range of the book covers from the North Sea coast, down to the very edge of the Ypres Salient. The time period incorporated goes from the very start of the war, right to the late operations in September 1918. It is an aspect of the war which, for many of those interested in it, will be less familiar, unless they dig deep and look to further reading. Thanks to the author, this aspect has been given vital coverage. The geographical area covered stretches from the north of Ypres, up the Yser-Ypres Canal, through West Flanders to the North Sea, through the River Yeser, to Disksmuide and Nieuwpoort...

Throughout there are detailed maps, which provided that crucial context to the content, alongside remarkable visual photographs. Just one of these photographs shows Belgian troops during mobilisation in August, 1914, from 'The Sphere', whilst another shows Belgian front line trenches dug into the Yser Dyke. If you are heading to Belgium to study the battlefields, this is another 'must' book, to pack in your bag!

This fact-laden book offers much to serious historians, buffs and battlefield trekkers. It is recommended highly.

The ‘guide’ section of the book is very useful, giving well set out and easy to follow tours which enable a new perspective to be discovered, and close to Ypres too. It’s well worth taking the time to experience this important sector of the front and this book will prove indispensable if you do so.

When any book comes out from Chris Baker, you are confident that it will be a quality read. This volume of the Belgian sector brings to light an often overlooked section of the front. The contribution of the Belgian Forces to the war effort of frequently lost due to our Anglo-centric view of the battlefields of Belgium.. This book does a good job to dispel the view that once the sluice gates were opened this section of the front was secure and nothing happened. The tours detailed in the book look interesting and will defiantly form part of my future trips.

Genuinely new research & highly recommended to get you visiting a fascinating sector of the Western Front.

This book has taken the author many years of hard work and research to complete, from his first visits back in the 80s, he has immersed himself in the history of Belgium, learning about its geography, art, culture, architecture, food, and language, although a relatively small country it has a complex make up and several almost tribal divisions of language and culture, all of which one needs to understand when learning about the country's reaction to the German invasion.

Sometimes a book comes along that makes you think ‘why hasn’t this been done before’ and that’s exactly how I feel about ‘From the Channel to the Ypres Salient’. The role of the Belgian army in the First World War has long been overlooked, and I myself was shamefully ignorant about their actions along the Yser before reading this book. Aimed at the British reader it has everything we’ve come to expect from an excellent Battleground Europe publication – extensive research, an expert narrative of what unfolded and a detailed on the ground guide. I can’t wait to get back to Belgium and explore these areas, fully equipped with Chris’ incomparable knowledge.

New in the Battleground Ypres series of guides, this covers the Belgian Sector 1914-1918, north from Ypres to the North Sea coast. A 257-page soft-cover battlefield guide, providing the historical background along with a number of tours described in detail. A little different from the other books in the Battleground Great War series, as this focusses in particular on the story of the Belgian Army during the war.

An excellent delivery of history and tour book by a recognised expert on the area. Essential reading for anybody wanting to brush up on the subject or planning a visit.