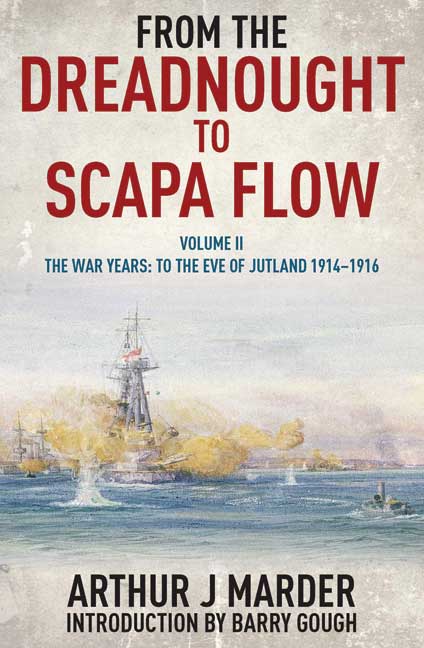 From the Dreadnought to Scapa Flow Volume II (Kindle)

Click here for help on how to download our eBooks
Add to Basket
Add to Wishlist
You'll be £6.80 closer to your next £10.00 credit when you purchase From the Dreadnought to Scapa Flow Volume II. What's this?
Need a currency converter? Check XE.com for live rates

The five volumes were subtitled The Royal Navy in the Fisher Era, 1904–1919 and they are still, despite recent major contributions from Robert Massie and Andrew Gordan, regarded by many as the definitive history of naval events leading up to and including the Great War. This second volume begins with the embarrassing escape of the German ship Goeben, before moving on to the defeat at Coronel, soon avenged off the Falkland Islands. Marder then turns his attention to the humiliation of the Dardenelles and the submarine menace, before looking in detail at the whole question of British strategy and at how the High Seas Fleet was to brought to battle and dealt the crushing blow which the British public felt so confident of. A new introduction by Barry Gough, the distinguished Canadian maritime and naval historian, assesses the importance of Marder's work and anchors it firmly amongst the great naval narrative histories of this era.

Volume Two, The War Years: To the Eve of Jutland begins with an assessment of the professional qualities of RN admirals and captains, a feature which Marder returns to throughout his work as he examines the various actions at sea. His narrative of the escape of the German battle cruiser Goeben from the RN Mediterranean squadron is both exciting and frustrating as a tactical RN failure. The political machinations at the Admiralty with Churchill and Fisher turning their initial cooperation into outright hostility is equally fascinating as the narrative leads up to the Dardanelles campaign. The naval actions described in Volume Two are complemented by maps depicting the actions: The Chase of the Goeben, The Battle of Coronel, The Falklands Islands Battle, The Scarborough Raid, The Dogger Bank Action and the Lowestoft Raid.

This is a modern, affordable, and extremely welcome paperback reprint of Arthur J Marder's classic account of the Royal Navy in the First World War. First published in 1965, after Marder had recovered from the inadvertent binning of his original notes from 1914 onwards, what had originally been intended to be a single volume had already become two, and would now, when complete, be five, of which this - covering the outbreak of war to the eve of Jutland - is the second.

A highly readable book which provides thorough coverage of a vast subject - it deserves to be on the bookshelf alongside its companion volumes.

In Volume Two, the author continues his immaculate study of the Royal Navy into the first half of World War One. Again, he covers all aspects, political, financial, military and operational, of this critical period of history that has done so much to shape the period that followed it.
The author explains very well how the Royal Navy and the politicians worked to reposition defences and provide an effective counter to German expansion. This is a valuable reference work that reads easily and will satisfy the most committed enthusiast of naval history. By reprinting this work in paperback, the publisher has done a great service to the understanding of a very important period of history.