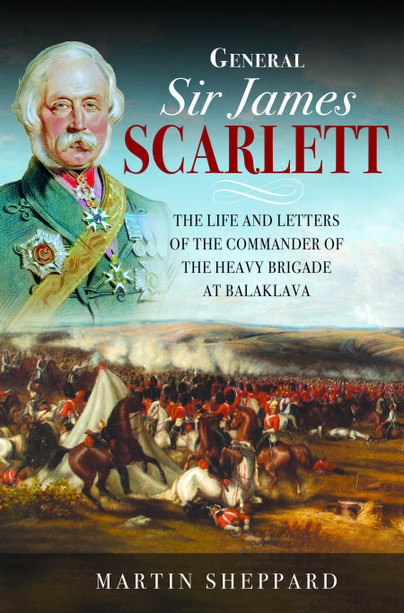 Click here for help on how to download our eBooks
Add to Basket
Add to Wishlist
You'll be £1.99 closer to your next £10.00 credit when you purchase General Sir James Scarlett. What's this?
Need a currency converter? Check XE.com for live rates

The morning of the Battle of Balaklava, on 25 October 1854, saw a desperate charge against a greatly superior Russian force. Epitomised by the reckless courage of the British cavalry in the face of heavy odds, the charge was a complete success, putting the Russians to flight. This charge was not that of the Light Brigade, which took place later the same day, but that of the Heavy Brigade, under the command of General James Scarlett. Caught by surprise, Scarlett dressed the three hundred men nearest to him, placed himself well ahead of them and charged uphill to an extraordinary and unlikely victory.

The Charge of the Heavy Brigade, a resounding success, has unjustly been overshadowed by the blunders that led to the heroic defeat of the Charge of the Light Brigade. James Scarlett himself has also been unfairly ignored due the focus on the enmity between the Earls of Cardigan and Lucan. The strategic significance of the Heavy Brigade’s victory, preventing the Russians capturing the key British base, the port of Balaklava, has been overlooked, as has General Scarlett’s decisive part in thwarting Russia’s best chance of winning the Crimean War.

Although his heroic leadership at Balaklava was undoubtedly the most important event in James Scarlett’s life, he had a long and distinguished military career before and after the Crimean War. Based on his own previously unpublished letters, including a long description of his day at Balaklava, General Sir James Scarlett is the first book focused on a remarkable soldier.

Book review 'Fragments of Old Burnley' as featured in

Martin Sheppard founded and ran the distinguished history publisher Hambledon, editing and publishing 300 books by leading historians. Since selling Hambledon, he has himself written or edited six books on London and on family history.  Martin lives in Primrose Hill, on the history of which he is the world’s leading expert. He is an ex-Chairman on the Independent Publishers Guild and was part of a Keble College, Oxford, team which lost University Challenge on the last question of the third round of the final.

The great, great, great nephew of General Scarlett, he inherited a family archive which included over forty of the General's unpublished letters. A member of the Crimean War Research Society, he lives in London with his two dogs.