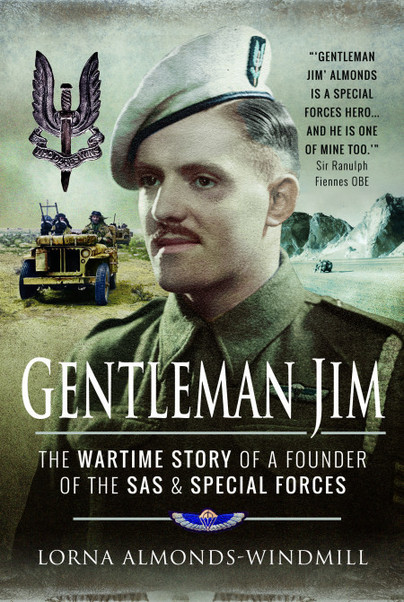 Click here for help on how to download our eBooks
Add to Basket
Add to Wishlist
You'll be £4.99 closer to your next £10.00 credit when you purchase Gentleman Jim. What's this?
Need a currency converter? Check XE.com for live rates

This remarkable story of Jim Almonds (Gentleman Jim) is set in wartime England, the western desert, Italy and France and recounts his formative role in the birth of the SAS. Against a dramatic background of love, courage and high-risk adventure, it captures for the first time the real spirit of the young soldiers in the newly emerging Special Air Service.

Jim Almonds, a sergeant in the Guards Commandos, sailed for the Middle East as part of 'Layforce' in January 1941 with David Stirling and others destined to become SAS 'L' Detachment 'originals'. Following intensive training in the desert and action at Tobruk, Sidi Haneish, Nofelia and Benghazi, Almonds was captured and shipped to a POW camp in Italy, where he staged two escapes. After thirty-two days on the run in enemy territory, he reached US forces at the Benevento front line. Later, he parachuted into occupied France where he harried the Germans so effectively that he was awarded the Croix de Guerre.

Written by Gentleman Jim's daughter and based on Almonds' own diaries, various primary sources and interviews with other 'originals', the action throughout is vivid and immediate.

There has been a lot of books written about the SAS however none have been as fully sourced or direct from the eyes of it's creator than this book. Gentleman Jim is the account of one of the men responsible for the creation of the Special Air Service, Jim Almonds and highlights the true energy and promise of the young soldiers in this new military organisation. The book describes everything from the formation of the 'L' Detachment which would become the SAS to it's leading of the advance into Germany during the second world war. With fluent and exciting prose backed up by personal photographs of Almonds himself, the book will keep the reader gripped page after page. As it is written by Almonds' daughter, Lorna who has her own experience in the Royal Corps of Signals, the book ultimately provides an air of authenticity and personal touch arguably missing from other biographies.

The value of this biography lies as much in the alchemy between author Lorna Almonds-Windmill and her father, the aptly-named Gentleman Jim, as in how the tenets of unconventional warfare were first established. Her scrupulous determination to tell the story of one of the SAS originals through his voice – drawn from a wartime diary and interviews – gives us a rare insight into the men who laid the foundation for a unit that continues to awe and inspire more than seventy years later. Anyone with a passing knowledge of today’s SAS will be astonished by the grim determination of David Stirling’s recruits to succeed despite early setbacks and the inertia of unimaginative staff officers. Equally impressive is just how innovative and successful they were with (by 21st century standards) the most primitive of equipment. The kit and tactics may have evolved, but the spirit of those first special operations warriors is unchanged.

Jim Almonds, a Sergeant in the Guards Commandos, sailed for the Middle East as part of Layforce in 1941, along with David Stirling and others destined to become 'L' Detachment "originals". Based on Almonds' own diaries, primary sources and interviews, the author captures the spirit of the men of the newly-emerging SAS.

This book covers the life of Jim Almonds, his career in England, the western desert, Italy, and France, and his formative role in the birth of the SAS.