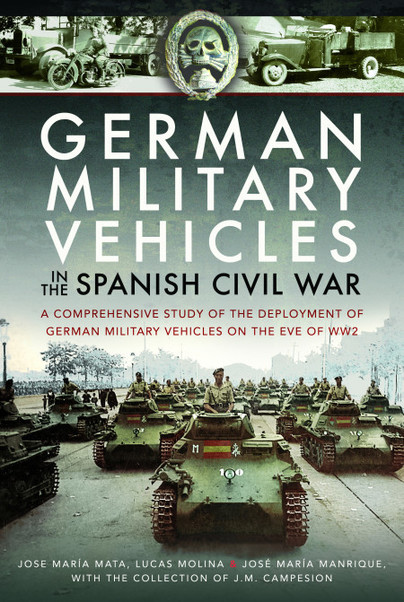 Click here for help on how to download our eBooks
Add to Basket
Add to Wishlist
You'll be £4.99 closer to your next £10.00 credit when you purchase German Military Vehicles in the Spanish Civil War. What's this?
Need a currency converter? Check XE.com for live rates

If you want to find out more about the Spanish Civil War and the vehicles in use at the time then this would be an ideal book to provide an introduction.

Due to its proximity to World War II, the Spanish Civil War is often overshadowed and books on the subject have been, until recently few and far between. This book seeks to address this and succeeds comprehensively. Military historians will find much to interest them and military model makers will find many interesting photographs within the pages of this book that have not been seen before Highly recommended.

Masterpiece with special place within our library.

The Civil War that broke out in Spain in 1936 was used as a training ground for the German ground and air forces in the Condor Legion that supported the Spanish forces under fascist General Francisco Franco. Within three years, the lessons learnt here would be put to devastating effect in Poland, the Low Countries and France.
This book comprehensively describes the German armour. This was mainly Panzerkampwagen I Ausf A and Bs including four Ausf A “Breda” that were fitted with a turret mounted 20mm Italian cannon that gave the normally machine gun armed tanks an anti-tank capability. There were also Panzerbefehlswagen I Ausf B Command tanks as well at least one “Ohne Aufbau” (without superstructure) that was used for training. It is interesting to note that the main impact of German ground forces (aside from providing equipment) was training with around 56,000 Nationalist soldiers trained by the Germans.
As well as armour the Germans provided a plethora of soft skin vehicles from BMW motorcycles, through Horch, Mercedes-Benz, Wanderer and Stoewr cars through to trucks from Vomag, Büssing-NAG and the ubiquitous Opel “Blitz”. There were also specialist vehicles like the Krupp “Protze”, Büssing-NAG workshop truck and Phänomen Granit ambulance. The book also covers the ground vehicles used by the Air Force contingent which included signals trucks and specialist vehicles used to support aircraft as well as Sd Kfz 7 Half-tracks used for towing 88 mm Flak 18 anti-aircraft guns.
The book is lavishly illustrated with archive photographs on almost every page. Each has a comprehensive caption accurately identifying vehicle types and sometimes location. There are drawings depicting various scenarios and some of these are repeated in a colour section in the centre showing a variety of vehicles and detailed drawings of uniforms worn by German and Spanish troops. The text is well researched and takes the reader chronologically through the build-up of the German contingents and the impact they had on the conflict. But it is not just about the vehicles supplied by the Germans. The book also looks at the personnel involved. Soldiers like Wilhelm Von Thoma who commanded Panzer forces in Spain and would go on to command 17 Panzer Division during Operation Barbarossa and later Panzer troops in the Western Desert
Due to its proximity to World War II, the Spanish Civil War is often overshadowed and books on the subject have been, until recently few and far between. This book seeks to address this and succeeds comprehensively. Military historians will find much to interest them and military model makers will find many interesting photographs within the pages of this book that have not been seen before Highly recommended.

This book combines succinct text with lavish illustration. The photographs included in this excellent study include many very rare images. – Very Highly Recommended.

Overall the book is a very good book.

Worth getting if you're interested in German machinery, or even machinery of the War/period.
Well-written, well-illustrated, well-edited. Plenty of 'nuggets' of info, and has increased my interest in what went on in Spain.

This is a book that’s really covering ground that hasn’t been covered elsewhere. Worth the money.

This is a great SCW modeler's reference -- at least from the German equipment perspective. Enjoyed it.