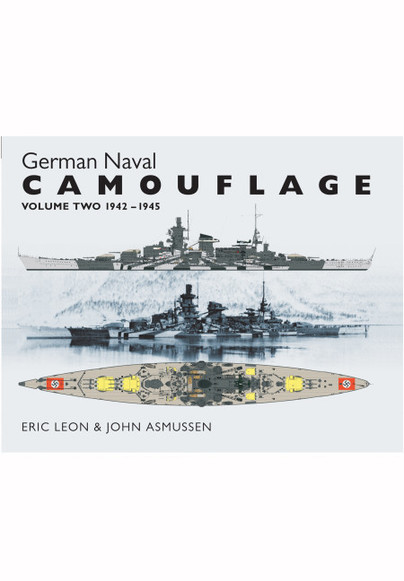 Click here for help on how to download our eBooks
Add to Basket
Add to Wishlist
You'll be £14.00 closer to your next £10.00 credit when you purchase German Naval Camouflage Volume II: 1942 - 1945. What's this?
Need a currency converter? Check XE.com for live rates

This book completes a highly original and superbly illustrated two-volume survey of German naval camouflage and markings in the Nazi era. On first publication in 2012 the 1939-1941 volume was quickly recognised by warship enthusiasts and modelmakers as a major step forward in the understanding of a complex and much debated topic. It is already considered the standard reference, and this second volume is keenly awaited.

Although a few crucial documents have recently come to light, this study is largely based on close scrutiny of all available photos, including many newly discovered, collated with the first-hand testimony of Kriegsmarine survivors. After decades of study, the authors are probably the world's leading experts, and their work challenges many accepted views, while greatly expanding the general understanding of the subject. The fruits of their labours are presented in the form of exquisite colour illustrations of every scheme and variation for which evidence is available. This volume covers all major surviving ships down to destroyers from 1942 to the end of the war, and adds a new section on torpedo boats.

While there can never be a last word on such an elusive and poorly documented subject, these two volumes will remain the most authoritative work in the field for many years to come.

Impressive, wonderful and indispensable for both historians and modellers or naval wargamers.

This is the second of the excellent series on the larger ships of the German Navy in WW2...

This volume, like the previous one is in portrait shape, the detail is almost day to day, and I cannot imagine anyone being able to find a publication more accurate and precise than this book and its first volume.

As usual the drawings are superb.

...as for the detail, I salute the authors for their incredible research and skill in producing yet another volume of great value to naval historians and ship lovers.

This book completes a highly original and superbly illustrated two-volume survey of German naval camouflage and markings in the Nazi era.

This is a specialist book for the professional and the serious enthusiast. The quality of illustration is consistently high throughout the book.

The computer-generated colour drawings are truly outstanding... An exceptional volume and highly recommended.

Coupled together, these two volumes provide a gold mine of reference material for modellers of the Kriegsmarine during WWII and include some interesting notes and explanation about colour references and interpretation.

These volumes are undoubtedly the best source of information on these paint schemes.

Following on from 2012's Volume One, this new book provides comprehensive coverage of the Kriegsmarine's warships in the second half of the war.
For a modeller building one of these vessels, this book must be the most useful and authoritative source.
Highly recommended.