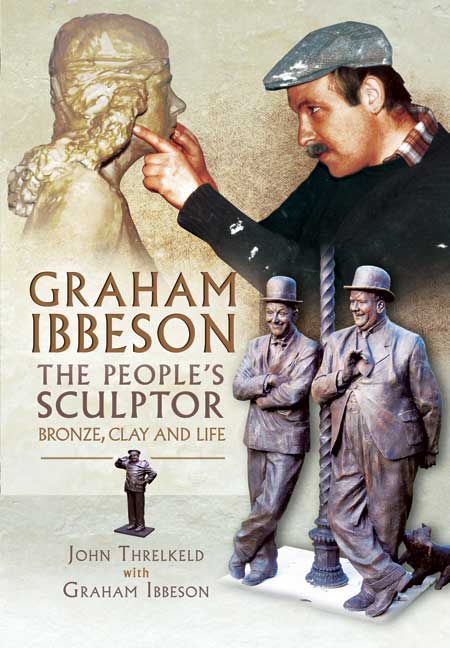 Click here for help on how to download our eBooks
Add to Basket
Add to Wishlist
You'll be £4.99 closer to your next £10.00 credit when you purchase Graham Ibbeson The People's Sculptor. What's this?
Need a currency converter? Check XE.com for live rates

'Just William’. The name conjures memories of Richmal Crompton’s favourite character. No childhood was complete without the outrageous exploits of William and his constant companions, ‘The Outlaws.’ Sculptor Graham Ibbeson was beguiled by the words in the bestselling books and by the portrait of William on the front covers, a cheeky boy with tousled hair and a catapult sticking out of a pocket. Decades later Graham produced his own version of William, immortalized in fibre glass for the Bethnal Green Museum of Childhood, to mark the centenary of Crompton’s birth. The Daily Mirror was so impressed by this tribute to one of fiction’s wonderful characters that one of its staff men photographed Graham walking with the statue up one of the last remaining cobbled streets in Barnsley.

Much of Graham’s work has revolved around childhood. His early years figure in much of his amusing fibre glass work and characters such as George and Eric are based on Graham and his cousin, Paul. His own humour responds to the distant sounds of boyhood and in a way this book is a celebration of childhood and laughter. It also traces the setbacks and triumphs of an artist who was born in a mining village and who produced a national icon, the Eric Morecambe statue, which helped to turn the economic tide in the Lancashire resort of Morecambe.

The book outlines the stories behind other notable public statues, including Laurel and Hardy, Les Dawson, Dickie Bird and Cary Grant. It is both an informative and entertaining book about the life and times of the people’s sculptor, a man whose craftsmanship has left an elegant and permanent mark on more than 30 of the country’s townscapes

John worked on newspapers in Barnsley for 50 years, retiring as deputy editor of the Barnsley Chronicle in 2010. He was born at Wombwell and started work on the Chronicle in 1960, moving to the Sheffield Morning Telegraph’s Barnsley office in 1969. He returned to the Chronicle in 1975 to take over the Wombwell and Hoyland editions and was appointed news editor four years later. He became an assistant editor in 1986 and deputy editor in 1989. In 1987, to mark the 100th Yorkshire miners’ galas, he published Pits, a book on the history of mining in the Barnsley coalfield. The hardback version was published in 2004.