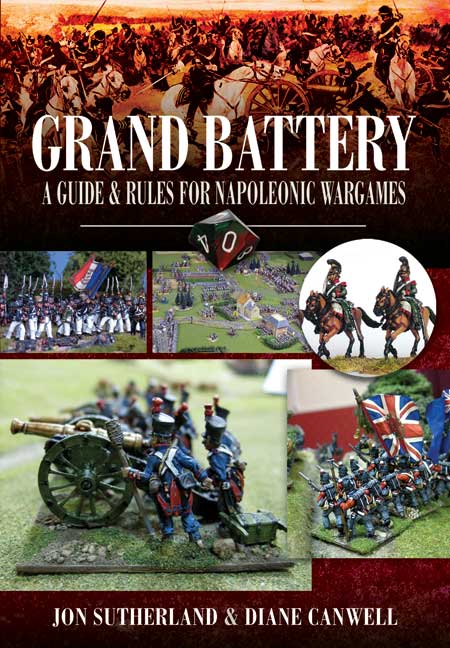 A Guide and Rules for Napoleonic Wargames

Click here for help on how to download our eBooks
Add to Basket
Add to Wishlist
You'll be £4.99 closer to your next £10.00 credit when you purchase Grand Battery. What's this?
Need a currency converter? Check XE.com for live rates

How would you have fared as one Napoleon's marshals, or in command of a division of redoutable British redcoats under Wellington? Grand Battery offers you the chance to find out. This book includes all the rules you need to play miniature wargames set in the Napoleonic Wars, plus plenty of useful background information you need to get started.

There is a concise historical overview of the events and battles of the period, as well as sections on the weapons and tactics of the various armies. The buyer's guide gives an up-to-date survey of the wealth of ranges of miniatures available and advice on which are compatible with which. Organizational tables give a breakdown of typical formations for all the major combatants and most of the minor ones (any one for a Wurttemburg infantry division?), allowing you to structure your collection and also to organize hypothetical games quickly with 'off the peg' orders of battle. Three historical scenarios are also included, each with their own specific orders of battle, maps, objectives and victory conditions.

The rules themselves, which utilize an innovative card-driven turn sequence to simulate the unpredictable ebb and flow of battle, are designed for playability, while still giving 'realistic' results and rewarding sound tactics. Though designed primarily for division level games with 25 or 15mm figures, the command and control sysyem takes account of corps or even the largest army level games and they are easily adaptable to any figure scale.

Get ready to march to the sound of the guns!

As Reviewed on Miniaturas JM.

I was very impressed with Grand Battery. This book is very well written and jam-packed with information from cover to cover. have read a large number of wargame books that specialized on the Napoleonic period in 30 years and while they were good, I believe that Grand Battery is one of the most comprehensive wargame books devoted to Napoleonic Wargaming. The depth of historical information presented, along with an excellent set of Miniatures Rules makes this a book that should definitely be read. Whether you use the book as a piece of reference material on the Napoleonic Wars, a different type of rules set or informative reading, I think that anyone who spends the time reading Jon Sutherland and Diane Canwell's Grand Battery will see the wide scope of the Napoleonic era and begin to appreciate why this period of history is so popular with gamers. Grand Battery is a Napoleonic reference book and rules set that I can highly recommend to all wargamers.

One of the things I love about wargaming is the idea of total immersion; not only learning the fluff, and spending hours painting the models; but playing a long game and getting deeply involved in every move, discussing the tactical aspect of potential moves with my opponent, as well as trading the occasional piece of ‘trash talk’ or gentle mocking.

I have always been attracted by the idea of larger and more complex gaming, with orders, chains of command and lots of cross referencing on complex charts.  This is the territory of the ‘old-school’ historical wargamer and, dare I say it, the Napoleonics wargamer.

Recently I was sent a review copy of ‘Grand Battery’ by husband and wife writing team Jon Sutherland and Diane Canwell (who you may have seen writing an excellent column in Battlegames magazine).

The book is a standard (novel sized) hardback running to nearly 200 pages, with lots of photographs of models, mostly being used for games.  As with all the Pen and Sword titles that I’ve seen, the book is well laid out.   My only criticism is that there seemed to be a few spelling and formatting errors, which distracted from the content from the book a little.  Anyway, with my history of spelling and grammar errors I’m in no position to get too upset.

The book starts with a very warm and friendly introduction, which immediately puts the novice gamer (or n00b) at their ease, before getting straight into the good stuff.  The first half of the book provides the background (what we modern gamers refer to as the ‘fluff’), discussing the history and main battles of the period, followed by a breakdown of the composition and armament of the various forces involves.  The second half of the book introduces the rules.

The rules are primarily designed for 15-28mm scale miniatures, but there is discussion of using smaller and larger scales on the table, and I don’t believe that this would impact on gameplay.  The game is based around an orders driven system, assigning actions to units in advance, and ensuring that the chain of command is maintained (or else having to send couriers between units to pass orders!).  This leaves players having to plan well in advance, fighting against the fog of war which will frustrate players as much as it did their historical counterparts.

There is an unstated assumption from the authors that the two generals reenacting the battle are there to enjoy the gaming experience and discuss potential historical events rather than focus on winning at all costs, or using definitions of the rules that take away from the spirit of the game.  The rules are clearly to be played for enjoyment, rather than in a competitive environment, the spirit of the game is on an enjoyable gaming experience, rather than smashing your opponent.

The rules provide a great degree of flexibility which will allow a large number of historical battles to be refought with ease, a number of scenarios are included at the end of the book for this very purpose, though you could easily refight you own particular Napoleonic battle (if you have one in mind).

If I had a friend or older child who fancied getting into historical gaming, or an interest in learning about the period, this book would be an excellent starting point; steering clear of the ‘rules lawyering’ that is present in other systems.  Though I wouldn’t attempt to take this along to my local club or try to win over some hardcore 40k players, but that's just me and my group and is no way a reflection on the book.

But the most important question; Is it frugal?  Well, yes.  If you fancy learning a bit more about the period or historical gaming, this book is reasonably priced and well presented, and will undoubtedly provide hours and hours of enjoyment.  Combine it with a couple of boxes of Perry Plastics and you’ve got yourself a fantastic starter set for a really good price.  If this sounds like something you'd like to try, I’d certainly recommend picking it up.

The book also hints at future wargaming titles from Pen and Sword, and I’m looking forward to other titles in this series.   The website already has ‘Blood, Bilge and Iron Balls: A Tabletop Game of Naval Battles in the Age of Sail’, promising both small and large scale fast play battles, on pre-order and if the quality is as good as Grand Battery, it’ll be a great read.

Unlike previous rule sets, which offer only a brief overview of the historical background this book is 3/4 historical material and 1/4 rules so even if, like me, you are not convinced by the rule system there is a lot else of interest in the book for people new to the fascination of the Napoleonic wars.

I was a little surprised to be asked to review the first of a new range of wargaming books by Pen and Sword Books, perhaps I should not have been.

The authors are husband and wife team, who have written a number of military history books; they also run a residential wargaming centre in Norfolk. The hardback book is produced to a good standard, as one would expect from Pen and Sword books, full of images, packed full of information and including a new set of wargaming rules Grand Battery.

The book has an introduction to European warfare 1792 to 1815 and discusses the armies. It was good to see that the weapons and tactics chapter covered more than the usual British/ French focus of many books covering the period. My stereotype is that standard Napoleonic books have pages devoted to British and French tactics and then a paragraph at the end saying the Austrians, Russians etc. had similar tactics. This work is much better balanced between the armies of the protagonists.

The Grand Battery Wargaming Rules are designed for the divisional level Napoleonic battle, though they will work for army games. They use a card driven activation system for corps, with each corps having a card in a shuffled pack. Their sequence of activation, movement and firing is determined by the drawing of the cards. The authors implementation of the card activation system has an interesting twist, the other player can challenge once a turn based on their leadership rating. This represents a commander attempting to seize the initiative back.

The rules aim to portray the battle from the divisional commander’s perspective, with emphasise on commander’s ratings, unit training and experience, giving orders, defenders resolve and morale. The rules are detailed, but are well explained and are supported by playing aids and play sheets. I have tried the rules and they work fine.

Like all academic reviewers, I realise the need to be pedantic to demonstrate whatever academic reviewers are trying to do by being pedantic. The contents page has two of the chapters in the wrong order. The excellent photographs lack captions to explain what they show. The Bibliography omits the key work on Napoleonic Wargaming Paddy Griffith’s Napoleonic Wargaming for Fun (but perhaps as the editor of the latter work, I was bound to say that). I could ramble on for several pages saying my whim would be add another paragraph here, or subtract a paragraph there, but there is no need. The book is a good piece of scholarship, with an interesting set of rules for representing the divisional level Napoleonic battle. I like it and have no hesitation in recommending it to my fellow enthusiasts.

John Curry, Editor of the History of Wargaming Project