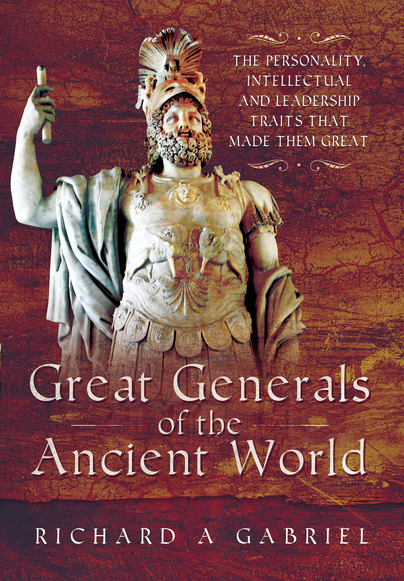 The Personality, Intellectual, and Leadership Traits That Made Them Great

Click here for help on how to download our eBooks
Add to Basket
Add to Wishlist
You'll be £4.99 closer to your next £10.00 credit when you purchase Great Generals of the Ancient World. What's this?
Need a currency converter? Check XE.com for live rates

Of the thousands of commanders who served in history’s armies, why is it that only a few are remembered as great leaders of men in battle? What combination of personal and circumstantial influences conspire to produce great commanders? What makes a great leader great? Richard A Gabriel analyses the biographies of ten great generals who lived between 1481 BC and AD 632 in an attempt to identify the characteristics of intellect, psychology, personality, and experience that allowed them to tread the path to greatness. Professor Richard Gabriel has selected the ten whom he believes to be the greatest of them all.
Those included, and more so those omitted, will surprise many readers. Conspicuous by their absence, for example, are Alexander the Great and Attila the Hun. Richard Gabriel, himself a retired soldier and professor at the Canadian Defence College, uses his selected exemplars to distil the timeless essence of military leadership.

This is a good-quality hardback with an extensive bibliography.

Concluding, this book is a good book to give as a present to a lover of military history or when bought for a short overview of military history of the Ancient World. In its kind it is certainly one of the better books on Great Generals, especially because of the thorough arguments used. Try it yourself!

Overall Great Generals of the Ancient World is well worth the read as a fascinating introduction to the nature of warfare and the conditions in the past that determined its successful conduct, using Antiquity's great commanders as study cases. It is a useful starting point for anyone interested in military history of this period (or rather of these periods). Gabriel has written biographies of most of the commanders he describes so this book serves as a good debut to the rest of his work.

Mr. Gabriel does plead a great case for his inclusions and omissions. Do yourself a favour and pick this book up and argue over it as I have.