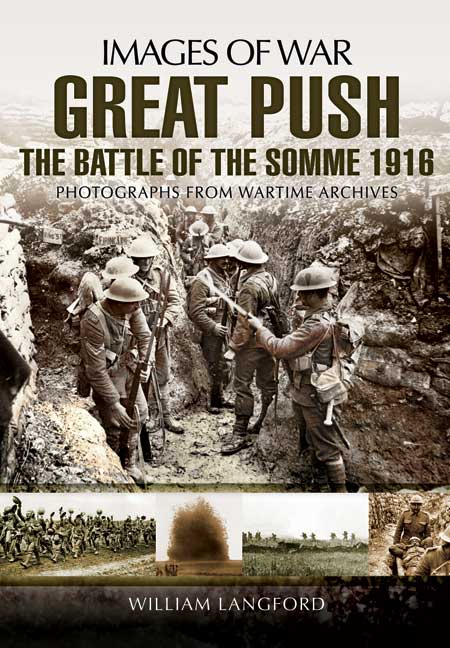 Click here for help on how to download our eBooks
Add to Basket
Add to Wishlist
You'll be £4.99 closer to your next £10.00 credit when you purchase Great Push On The Somme 1916. What's this?
Need a currency converter? Check XE.com for live rates

In 1916, Sir Douglas Haig, commanding the BEF, began his great offensive to drive the invaders off the ground they had been occupying for over a year and a half. The 'Great Push', as the offensive was advertised to the nation, began 1 July 1916. A glossy picture magazine was produced to inform the British public of the progress of the offensive. Over a four month period until the Battle of the Somme faded away in November the magazine appeared with the following advertising blurb:
'Sir Douglas Haig's Great Push; The Battle of the Somme; A popular, pictorial and authoritative work on one of the Greatest Battles in History, illustrated by about 700 wonderful Official Photographs and Cinematograph Films; By Arrangement With the War Office; beautifully printed on the Best English Art Paper.' As is well known, the Great Push turned out to be little more than a nudge, but, for the sake of national morale, the British public had to be encouraged to believe that all was going well; especially in view of the horrific casualties wrecking the lives of families throughout the land.

The Great Push, in the form of Images of War, helps capture the propaganda thrust of the times and presents once more the illustrations of those bewildering days.

The collection remains impressive and broad ranging. A useful chronology of the Somme actions is also included.

The Western Front Association Stand To!

Another good photo reference in the Images of War series, and fascinating if you are interested in WW1.