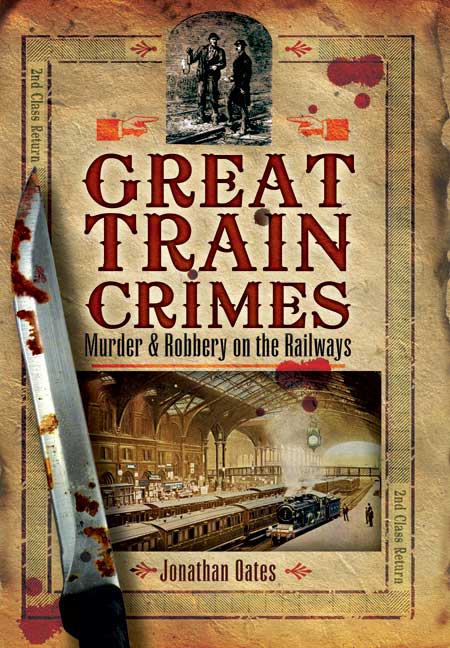 Murder and Robbery on the Railways

Click here for help on how to download our eBooks
Add to Basket
Add to Wishlist
You'll be £4.99 closer to your next £10.00 credit when you purchase Great Train Crimes. What's this?
Need a currency converter? Check XE.com for live rates

Murder and robbery committed on the railways have long held a special place in British criminal history. Railways and trains create special conditions – and opportunities – for criminal acts. Two legendary large-scale robberies took place on the British railways – the Great Bullion Robbery of 1855 and the Great Train Robbery of 1963 – and these extraordinary episodes are often used as examples of the ultimate in criminal audacity. But as Jonathan Oates shows in this powerful selection of case studies, most railway crime is less sensational yet, in many ways, more revealing.

He reconstructs in vivid detail some of the most memorable cases dating from Victorian times to the present day. Included are cases of adults and children who were thrown to their deaths from trains, decapitated corpses found beside railway lines, passengers who were pushed from platforms into the path of oncoming trains and others who were stabbed, shot or strangled during their journeys and were found dead on arrival. The sheer variety of crimes is astonishing, as are the stories that unravel behind them.

As he retells these sensational, bizarre, often ghastly tales, Jonathan Oates gives an insight into the reality of railway crime. His collection is a must for addicts of true crime cases and for readers who enjoy railway history.

Dr Jonathan Oates is the Ealing Borough Archivist and Local History Librarian, and he has written and lectured on aspects of the history of London, including its criminal past. His books include several volumes on West London in the Images of London series as well as Foul Deeds and Suspicious Deaths in Ealing, Foul Deeds and Suspicious Deaths in Lewisham and Deptford, Unsolved Murders in Victorian and Edwardian London and Unsolved London Murders: The 1920s and 1930s. He has also published a study of the Jacobite rebellion of 1745 and Sweet William or The Butcher? The Duke of Cumberland and the '45.

This is a very interesting and readable book, I would recommend it highly.

If you think train crimes stop at Agatha Christie's 4.50 From Paddington or Murder on the Orient Express, this book will be an eye-opener. Jonathan Oates charts train crimes from the Victorian period to the present day, from casual murder to calculated robbery. Included are the Gold Bullion Robbery of 1855, the ghastly death of a railway servant in a station's booking office, terrorist bombs on the Underground in the 1880s, murder on the Brighton line and The Great Train Robbery of 1963. The variety of crimes in surprising, as are the stories behind them; a must for true-crime addicts.