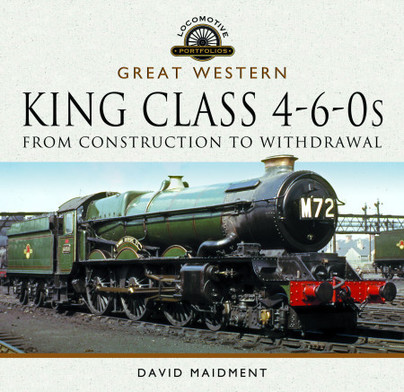 From Construction to Withdrawal

Click here for help on how to download our eBooks
Add to Basket
Add to Wishlist
You'll be £16.99 closer to your next £10.00 credit when you purchase Great Western, King Class 4-6-0s. What's this?
Need a currency converter? Check XE.com for live rates

Built by Collett in 1927 after pressure to restore the GWR’s pre-eminence in motive power and cope with increasing traffic post-war to the Devon and Cornwall holiday resorts, the thirty Kings were the final development of the Churchward Stars and the 1923 Castles and remained on top-link main line duty until their final replacement by the ‘Western’ class 52 diesel hydraulics in 1962. The book includes an insight into the thinking of some of Collett’s senior staff at the end of the 1930s and the eventual transformation in the latter years with redraughting and double chimneys. As well as describing their design and construction, the book covers comprehensively their operation and performance backed up by many recorded logs on all main GW/WR routes over which they were permitted. The author had close experience of the class when working at Old Oak Common between 1957 and 1962 and includes a chapter of his experiences with them including many footplate trips (as a management trainee, he was greeted with glee by many firemen who would hand him the shovel). The book includes over 300 photographs of which 100 are in colour.

As one has come to expect from David Maidment, this is a very professional, well-researched and important book that brings a fresh perspective to the life and work of these impressive locomotives. It will have wide appeal, not just to King aficionados, but also the many with a serious interest in steam traction.

No GWR fan should be without this superb volume – well worth adding to the bookshelf.

Much to like in this account of a powerful locomotive class, much promoted by the Great Western Railway.

In true Maidment style, the stirring history of these locomotives is supported with detailed technical descriptions and performance tables...

... One aspect that really sets this book apart is the chapter on David Maidment's personal experiences of every member of the class; surely not even O S Nock could have matched that! Add a fabulous array of photos, many superb ones in colour from the likes of Derek Penney, and you have a first class book.

The history of the GWR King Class locomotives have been told in previous books. But these are now out of print and Maidment’s volume is a very welcome and authoritative work which will interest anyone with an interest in express mainline steam locomotives. Recommended.

A good book to know these "real" locomotives.

Another great book in the series that is a must for those who want the full history of this class of locomotive. Highly recommended