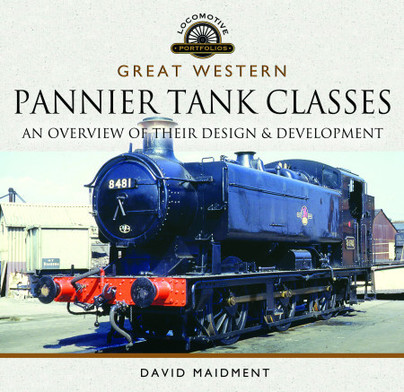 Click here for help on how to download our eBooks
Add to Basket
Add to Wishlist
You'll be £19.99 closer to your next £10.00 credit when you purchase Great Western, Pannier Tank Classes. What's this?
Need a currency converter? Check XE.com for live rates

There are many excellent photographs with detailed captions, including a central colour section of 16 pages (un-numbered), and the whole work is beautifully produced on heavy glossy paper – to Pen & Sword’s usual standard. The author’s notes & photos of various HO models of the type, and his own recollections of real railway operations, add a personal touch. This ensures that the book is not at all a tedious list of all the classes and their histories and features, but despite being fact-packed from cover to cover it remains an extremely interesting and readable volume for a wide range of railway enthusiasts. Also, we should not forget that the author’s royalties from sales of the book go to the Railway Children charity which he founded in 1995. (http://www.railwaychildren.org.uk/).

Another of David Maidment’s scholarly works in Pen & Sword’s ‘Locomotive Portfolio’ series, this 366 page work is packed with historic and more recent photos in both monochrome and colour, with comprehensive captions and full background information on the various classes and their antecedents. I particularly liked some early views of locos in open-cabbed saddle tank form with outside frames and a moody colour shot of a goods working on the Bala to Blaenau Ffestiniog branch amongst the mountains and moorland. There is a lengthy appendix of loco drawings and shed allocations of each member of the various classes.

A very comprehensive and useful volume.