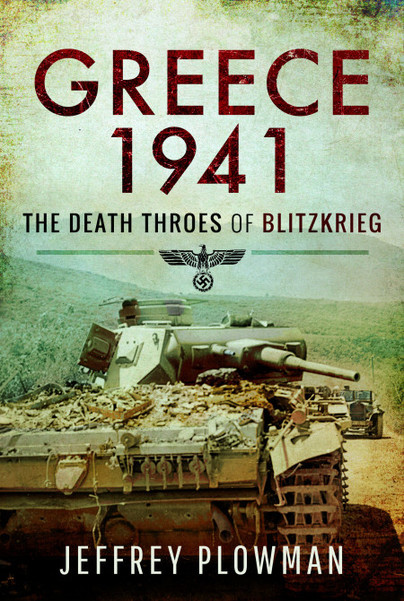 The Death Throes of Blitzkrieg

Click here for help on how to download our eBooks
Add to Basket
Add to Wishlist
You'll be £4.99 closer to your next £10.00 credit when you purchase Greece 1941. What's this?
Need a currency converter? Check XE.com for live rates

Blitzkrieg. Lightning war. We are all familiar with the rapid thrusts the Germans made in the early days of the Second World War that saw the demise first of Poland and then the Low Countries and France. But were the German tactics, which appeared at the time to smash through all resistance, really as devastating as they seemed? That is the major question Jeffrey Plowman asks in this absorbing new study of the campaign in Greece in 1941.

Within three weeks they overran the country but, by looking into the campaign in detail, the author claims that at no time did the Germans gain ascendancy over the token British and Anzac force sent to bolster the Greek defenders. They came close to doing so, but the Anzac troops and their Greek allies put up a spirited defence that sometimes turned the Germans’ own methods against them.

This perceptive new account should prompt a reassessment of the Greek campaign. It also offers a fascinating insight into the weaknesses of the Germans’ all-conquering method of warfare which became increasing apparent during the later stages of the war.

This is a good account of the British and Commonwealth involvement in the Greek campaign, setting the short period of fighting in its wider context, and asking some interesting questions about what it might tell us about the wider war.

This title is a serious historical work and is well researched and written in an informative and easily read style. It is packed with information and gives good analysis of the contrasting forces and their composition. It will give the average scholar of WWII a new perspective on the campaign and an understanding of just what was learned and how it shaped future conflict with Germany in North Africa. One thing is for sure, you will understand just what a valiant job the Greek and token commonwealth forces did in the inevitable unsuccessful defence of Greece. I would recommend this to students of military history, armoured warfare, wargamers and modellers.

It is well-researched and written and should interest a wide range of military historians because of its subject areas.

This perceptive new account should prompt a reassessment of the Greek campaign. It also offers a fascinating insight into the weaknesses of the Germans' all-conquering method of warfare which became increasing apparent during the later stages of the war.

The author states there were weaknesses in the German blitzkrieg tactics that the British were able to exploit. This is a point of view that will be seen skeptically by many, but the author makes a convincing case for this opinion; this makes the book an enjoyable read with a refreshing viewpoint on the blitzkrieg method of warfare.

The author has researched this subject exhaustively and presents a convincing case that highlights several weaknesses of this form of warfare and how the terrain was exploited by Allied forces to undermine rapid German advances.

Greece 1941 makes for a great introduction to an often-overlooked World War II subject. For wargamers, it’s a treasure trove of inspiration for tabletop scenarios.

A fascinating reappraisal of the frequently overlooked campaign in Greece which cost the Allies almost 14,000 casualties in killed, wounded and missing in less than a month of combat operations.

This book really triggered me to continue visiting places in Greece connected to WWII. It made me realize how much more interesting the fighting in Greece was than I had imagined. The author, Jeffrey Plowmann, has done some amazing research and writes well. This book highlights ANZAC forces - which I find wonderful. Also very interesting to read about the Waffen-SS (LSSAH) in Greece. The photos are great - my only negative comment would be that some of them could have been a bit larger. This is the book to read on your next trip to Greece, or before it ;-)

The author has 185 pages of well researched material with a decent amount of original source material as well as other published sources. There is a workable index and bibliography; and an ORBAT which is always a great help for the serious reader.

This book presents the German invasion of Greece in an interesting way that I do not recall having seen before. The back history going back 100 years plus appears to be very relevant to the actions that lead to this part of World War 2. The star for me are the firsthand accounts as they made the book difficult to put down and provided the human touch that history often fails to provide. The photographs provided depict events from both sides and adds the visual human element to the book. To finish I found this a surprisingly compelling read due to the approach taken by the author.

The bigger picture is sketched out at either end of the narrative, with the bulk of the book given over to the blow by blow ground level action, with excellent use of firsthand accounts keeping it very lively.

I do think this book brings something new to the subject. The campaign narrative looks at the battles from both sides of the hill and includes extensive quotes from memoirs and battle diaries. Arguably the best part of the book is Chapter 11, which looks at Operation Lustre in retrospect. This highlights the strategic failures of the Greek and British governments and the deployment errors in the region... I found myself carefully reading every chapter of this book, rather than skipping through what I thought I already knew. It is a worthy addition to our understanding of this campaign.

A detailed and well researched investigation of the German attack on Greece in 1941. Good explanations of the key actions which were very much conditioned by the ground. The narrative is backed by a very good bibliography which indicates the depth of research. It is supported by good primary source accounts. My only criticism is that some of the maps could have been clearer and perhaps larger but otherwise a good explanation of the campaign.