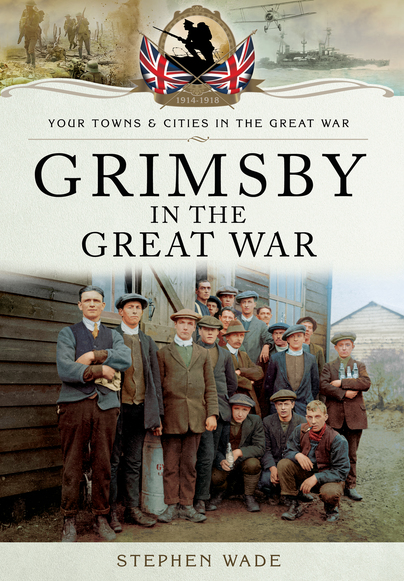 Grimsby in the Great War (Kindle)

Click here for help on how to download our eBooks
Add to Basket
Add to Wishlist
You'll be £4.99 closer to your next £10.00 credit when you purchase Grimsby in the Great War. What's this?
Need a currency converter? Check XE.com for live rates

Grimsby in the Great War is a detailed account of how the experience of war impacted on the seaside town of Grimsby from the outbreak of the Great War in 1914, to the long-awaited peace of 1918.

Grimsby and Cleethorpes were among the most vulnerable and exposed British towns in August 1914 when the Great War broke out. Situated on the North Sea, and facing the German Baltic fleet, their vessels were to face the mines and the U-boat torpedoes as the war progressed. But this is merely one of the incredibly dramatic and testing developments in the wartime saga of 1914-18, which impacted on the the town of Grimsby. Written into the greater story are the achievements of the Grimsby Chums and the other regiments containing Grimsby men, and the amazing story of the Home Front experience, from the local shell factory staffed largely by women, to the War Hospital Supply Depot and the Women’s Emergency Corps.

Throughout this compelling book, Stephen Wade documents the town's remarkable stories of heroism, determination and resolution in the face of the immensity of the war and its seemingly endless tests and trials of Grimsby's mettle.

Anyone with a link to Grimsby should read this book, as should anyone familiar with the Humber estuary. Grimsby in the Great War plays a valuable role in ensuring that the privations, sacrifices and exceptional achievements of a now long-departed generation are remembered not just in the context of the Western Front and other theatres of war, but also from the perspective of a hugely restructured and sometimes traumatised and destabilised home front.

Stephen Wade uses many different sources to illustrate the unique local nuances that are lost in the national narrative.
The voices of Grimsby people can be heard once again in this account, and the issues and hardships they faced during the Great War are brought to the fore so that we can understand something of the war they experienced.

This book also covers both regiments of Grimsby Chums and other regiments involving Grimsby men. Stephen Wade does not neglect the home front either. There was a local shell factory staffed almost entirely by women, a Women’s Emergency Corps and the War Hospital Supply Depot.

This book’s great strength is not only Stephen Wade’s thorough research but also his empathy for the subjects he writes about; he brings them to vivid life. A book with an appeal beyond the people of Grimsby.

More examples of how the women of Britain stepped up to take on the work of their menfolk as they signed up to fight in the trenches. Stephen Wade's book is testament to the courage and tenacity of the people of Grimsby as they went about their daily lives during the conflict. Superb.