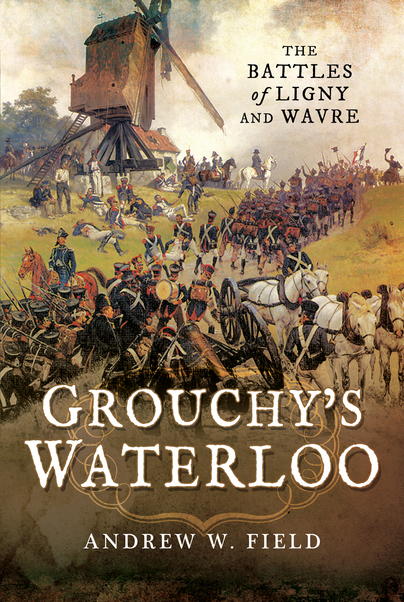 The Battles of Ligny and Wavre

Click here for help on how to download our eBooks
Add to Basket
Add to Wishlist
You'll be £4.99 closer to your next £10.00 credit when you purchase Grouchy's Waterloo. What's this?
Need a currency converter? Check XE.com for live rates

In this the third volume of his four-volume history exploring the French perspective of the Waterloo campaign, Andrew Field concentrates on an often neglected aspect of Napoleon's final offensive the French victory over the Prussians at Ligny, Marshal Grouchy's pursuit of the Prussians and the battle at Wavre. The story of this side of the campaign is as full of controversy and interest as the battles of Quatre Bras and Waterloo which he has examined in such a penetrating and original way in his previous studies.

Ligny was not the decisive battle Napoleon hoped it would be. Grouchy's pursuit the morning after the battle was misdirected, and famously he failed to march to the sound of the guns of Waterloo and prevent the decisive intervention of the Prussians. Yet then, on hearing the news of the disaster, he safely extracted his army.

Napoleon in his memoirs accused Grouchy, like Marshal Ney, of a series of failures in command that led to the French defeat, and many subsequent historians have taken the same line. This is one of the long-standing controversies that Andrew Field explores in fascinating detail. Grouchy's extensive description of his operations forms the backbone of the narrative, supplemented by other French sources and those of Prussian eyewitnesses.

As Andrew Field picks his way through the conflicting testimony he gives us a valuable new insight into the French view of their defeat and the bitter controversy that followed.

All in all, another excellent chapter in Field's essential contribution to the English language literature on this epoch ending campaign, bringing much needed balance by looking at the French side of the story.

The author gives us an excellent account of the two battles of Ligny and Wavre.

Very early on in this book the author endeared himself to me with two statements. On page 6 he expresses his intention not to name any places without including them on a map. As one who hates having to read with a map open by my side I applaud this notion in spite of the fact that he doesn't always succeed in mapping every place all though the book. On page 12 he refers readers elsewhere for the lead up to Waterloo stating that there is to a plethora of fine books on the subject. Again I was both surprised and pleased to find a 'Waterloo' book that did not start with Napoleon's escape from Elba. The book is written from a factual rather than a judgemental position with many insertions of contemporary and post event quotations from reports and diaries. However the last chapter 'Analysis and Conclusions' , where he does discuss the key controversies, is particularly worthy of note. My overall opinion is that the research has been thorough, the style of writing clear and lucid with many maps and illustrations. A book not to be put down until it is finished. Very highly recommended.

This book sheds new light on a relatively unexplored aspect of the Waterloo campaign and forms an important addition to the story. Highly recommended.