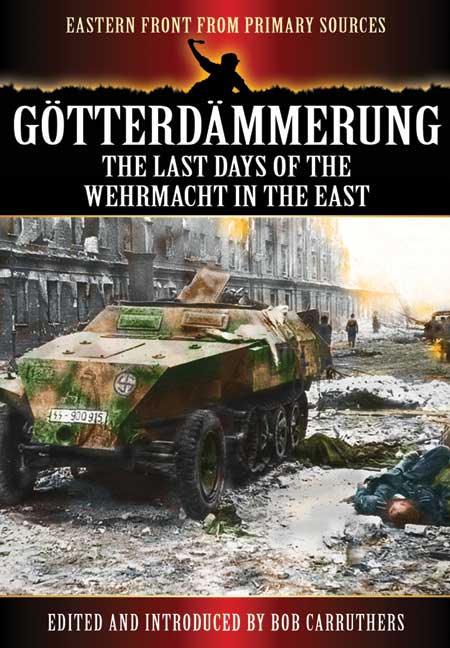 Götterdämmerung: The Last Battles in the East (Kindle)

Click here for help on how to download our eBooks
Add to Basket
Add to Wishlist
You'll be £4.99 closer to your next £10.00 credit when you purchase Götterdämmerung: The Last Battles in the East. What's this?
Need a currency converter? Check XE.com for live rates

This fascinating collection of primary source accounts focuses on the combat actions of the Wehrmacht in the final battles of the war. The material is drawn from a variety of wartime sources and encompasses fascinating writings concerning the tactical, operational and strategic aspects of the battle for Berlin. Compiled and edited by Emmy Award winning author and historian Bob Carruthers, this absorbing assembly of primary source intelligence reports encompasses rare material originally drawn from both German and Russian original sources to provide the reader with a unique insight into the last battles in the east. This is the unvarnished reality of what it meant to fight in this titanic struggle to the death.

Featured in the book are reports concerning little known and neglected tactical aspects of the war including weapons, street fighting techniques and improvised anti-tank measures. Original illustrations from US wartime intelligence manuals are also featured. This compelling compilation is essential for readers with an interest in discovering more about the last days of the Wehrmacht from a range of unusual and diverse primary sources.