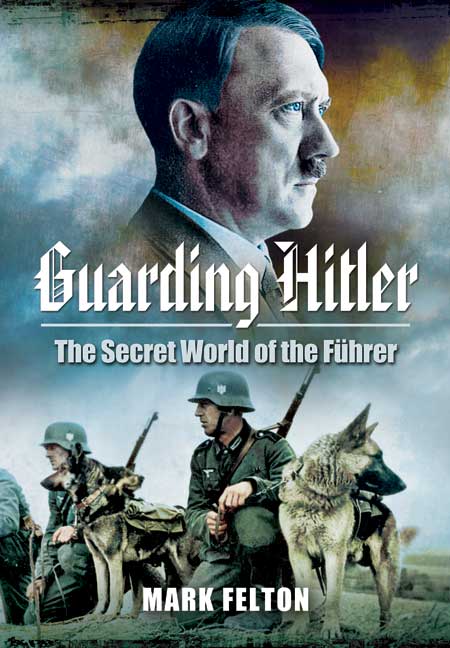 The Secret World of the Führer

Click here for help on how to download our eBooks
Add to Basket
Add to Wishlist
You'll be £4.99 closer to your next £10.00 credit when you purchase Guarding Hitler. What's this?
Need a currency converter? Check XE.com for live rates

Based on intelligence documents, personal testimonies, memoirs and official histories, including material only declassified in 2010, Guarding Hitler provides the reader with a fascinating inside look at the secret world of Hitler's security and domestic arrangements. The book focuses in particular on both the official and private life of Hitler during the latter part of the war, at the Wolfs Lair at Rastenburg, and Hitler's private residence at Berchtesgaden, the Berghof.

Guarding Hitler manages to offer fresh insights into the life and routine of the Fuhrer, and most importantly the often indiscreet opinions, observations and activities of the 'little people' who surrounded Hitler but whose stories have been overshadowed by the great affairs of state.

It covers not only the plots against Hitler's life but the way security developed as a result. His use of 'doubles' is examined as is security whilst travelling by land or air.

As little has been written about the security and domestic life of Adolf Hitler, Guarding Hitler allows the reader to delve deeper into this previously overlooked but nonetheless fascinating aspect of the world's most infamous man.

A book based on documentation and testimonies, it tells the story of how Hitler organized his life and security. It takes a look at his life at the Wolf's Lair at Rastenburg as well as his private residence, the Berghof.
New stories coming to light in the person who has captured the imagination and interest of thousands around the world.

I am extremely interested in WW2, and Nazi Germany. I find it an endlessly fascinating topic and will read anything I can get my hands on. So much my surprise when this entire book was full of NEW information, information I haven't come across in my extensive reading on this topic. That was already a good sign.

Although I cannot comment on the accuracy of the information, I did enjoy the author's writing style, which was quite captivating for a non-fiction book.

I have to mention that this book falls outside of my usual genre of Fantasy/Romance, yet I found it extremely interesting and it held my attention throughout.

As such I would recommend this to others who enjoy history, WW2 or just have an interest in Hitler and his reign of Nazi Germany.

A 22-year-old Swiss student decided to kill Adolf Hitler and got very close to succeeding. The capture of two unusual Waffen-SS soldiers in Normandy resulted in another of the many close calls with death that the Nazi leader had. If you are keen to learn about the close protection around Hitler, his body guards and their vehicles, then this book by Dr. Mark Felton should be of great interest to you.

What a fascinating book to read. Guarding Hitler! What a job that would have been. A great insight to this man. Lots to learn reading this book. He’s a fascinating man to learn about. But could you imagine trying to guard the world’s most hated man. The book was very informative. Truly interesting. A great read. The book was very well written and not like a lot of Hitler books these days full of known information

I cannot devour these types of books fast enough lately. I didn’t use to be a historical fan, but all books dealing with WW2 and the deplorable treatment of innocent men, women, and children strike at my heart. This book is a bit different than others I have been reading lately. As this is the Nazi side based on declassified documents and other testimonies. It doesn’t hurt my heart any less reading how things developed. I just hope the future can learn from the past.

Guarding Hitler: The Secret World of the Führer by Mark Felton is a non-fiction book focusing on the security arrangements of Hitler during his rise to power. Mr. Felton is a British historian and author.

This is a book with fascinating insights of both the official and private life of Hitler, especially during the latter part of World war II. The author walks the reader through the oppressor’s rise to power, the numerous unsuccessful attempts on his life and how his security detail has dealt with them, and changed to accommodate their new reality.

Mr. Felton did a tremendous amount of research into this book, as is evident from his list of source, relying on official reports, memoirs and personal testimonies of those close to the events.

Even with all my reading about World War II, I never realized how close Hitler came to being assassinated since the Beer Hall Putsch. It seemed that he created many enemies with his hateful rhetoric, and even those who agreed with him in some manner (for example his foreign policies) viewed him as a dangerous leader who will end up causing Germany to be occupied by its enemies and adversaries.

Hitler himself knew that many are out to kill him, he was obsessed with poising to the point where his food had to be specifically grown and was kept under constant watch by men he trusted from the moment it was picked (Hitler was a vegetarian), prepared, and plated. He even had food tasters, just in case.

If there is one constant in the book, is the notion of how lucky Hitler was. Several times he was saved by sheer luck, a bomb didn’t go off due to temperature, an assassin didn’t have the nerve, a bomb was moved, being late or early to an event due to weather, and more.

Guarding Hitler: The Secret World of the Führer by Mark Felton is not a book about assassinations though, it is about the security measures taken, and invented, to protect this horrible man. The author goes into some detail about the specialty vehicles Hitler used. His plans (Focke-Wulf Fw 200 Condor,Ju 290), trains (Führersonderzug), and automobiles all needed protection, used with great affect and were used as models for generations to come.

This book is concise, well researched, and very interesting. It details the conception, growth, and changes in Hitler’s personal team of bodyguards from his early rise as a small-time politician to the dictator who has thrown the world in turmoil, killing, conquering and committing atrocities.

Guarding Hitler: The Secret World of the Führer is well researched and an interesting read, that covers areas people haven't considered or thought about when it comes to Hitler.

Guarding Hitler is a incredibly dense and detailed account of the last years and days of Hitler.and in particular the security arrangements of the Fuhrer, both in his domestic world and in his public activities. It covers a huge range of topics, from travel arrangements to his final days in the Reich Chancellery bunker where he waited out the oncoming Allied onslaught and planned his suicide.
The book covers in intense detail the very many assassination attempts including the most famous Valkyrie plot. The author outlines his failing grip on reason, as his military incompetence leads to the ultimate failure in Stalingrad. It is the domestic details which are dangerously compelling, as is the tremendous loyalty he inspired in his staff, many of whom stayed with him to the very end, and ensured his corpse was not left to be defiled, or kept as a trophy or talisman.

This is a fascinating book, with evidence of exhaustive research.

But in all a great book and I was glad to have the opportunity to read advanced copy and review it.

Hitler is well known for his actions and policies that brought about the second war. What isn't known is the huge apparatus that kept him and his party members safely going from one country to another in a time of near constant assassination attempts against politicians of all parties.
Guarding Hitler starts with an interesting look at how it all started. The early years of the party and the players that fought for the rise of Hitler are described and the street fights and mayhem of his rise to power.The history continues with the first real introduction of security agents. Hitler and his SS and other forces are the modern progenators of the secret service that guards political leaders. A very interesting segment of this book covers Hitlers train that was hidden in the Wolfs Lair. The descriptions of the total security Hitler had are interestingly told as there seems to be a story behind lots of design of his protection.
The book continues with the attempt on his life in 1944 that failed. It is told in a way that I have never read before and had information in it that was new to me. The end of The Thousand Year Reich is told with the burning of Hitlers and Evas body in a wet hole in the ground in Berlin. The ones loyal to him to the end were there amazingly as they were devoted to their leader. These were some of the same bodyguards that he had had for years. Being a bodyguard for Hitler did not mean that you wont get a trip to the Russian front.So you had to be on your toes all the time.
A very interesting book that explores one of the most overlooked aspects of the German War Machine. None of this couldn't have happened without very skilled bodyguards keeping Hitler alive.

I recommend it to history buffs, and people with a special interest in this subject. The detailed accounts of the ones close to Hitler, and how he managed to escape death so many times is fascinating!

This book is an exhaustive treatise of the foundation, growth and changes in Hitler's personal contingent of bodyguards. Some of the names I had already known, but there were others that I did not.

Also listed are the numerous attempts on Hitler's life. He possessed surprising luck in dodging and avoiding – sometimes by minutes – attempts to kill him. A little ironic that he took his own life in the end.

I was interested in the description of how awful the communication between various units of the military was. The right hand didn't know what the left was doing...

I like the way the book tells at the end how the survivors of the bunker fared. Or, at least what is known of their fates. The book also contains a useful translation of German military terms, notes and a bibliography for those who want to further explore the subject.

A fascinating view into the close world Hitler inhabited and which shaped his life and decisions.

A hive of interesting facts and almost unbelievable stories about Adolf Hitler... Well worth a look [and] well worth a read.