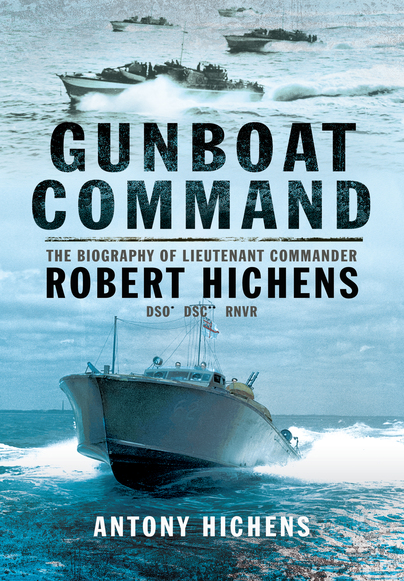 Click here for help on how to download our eBooks
Add to Basket
Add to Wishlist
You'll be £4.99 closer to your next £10.00 credit when you purchase Gunboat Command. What's this?
Need a currency converter? Check XE.com for live rates

This biography draws heavily on the personal diaries of the subject, Robert Hichens (or 'Hitch' as he was universally known). After a brief description of his early life, time at Oxford, his motor racing achievements (including trophies at Le Mans in his Aston Martin) and RN training, the book focuses on his exceptional wartime experiences. Hitch was the most highly decorated RNVR officer of the war with two DSOs, three DSCs and three Mentions in Despatches. He was recommended for a posthumous VC. We read of his early days in vulnerable minesweepers and the Dunkirk 'Dynamo' operation, (his first DSC). In late 1940 he joined Coastal Forces serving in the very fast MGBs, soon earning his own command and shortly after command of his Flotilla. He was the first to capture an E-Boat. His successful leadership led to many more successes and his reputation as a fearless and dynamic leader remains a legend today. The book contains detailed and graphic accounts of running battles against the more heavily armed E-boats. Tragically he was killed in action in April 1943, having refused promotion and a job ashore.

This book is on the Royal Naval College, Dartmouth official reading list.

The book contains detailed and graphic accounts of running battles against the more heavily armed E-boats. Tragically, he was killed in action in April 1943, having refused promotion and a job ashore. A fitting tribute by his son, who himself served in the Royal Navy.

The capital ships often collared the headlines and in peace and war they were a very visible statement of power, but the coastal craft were the frequent stars of WWII and were key to some of the most important activities during the conflict. The subject of this biography is in many ways typical of the buccaneering skippers of Coastal Forces, recommended for the Victoria Cross before his death and recipient of the DSO and DSC, mentions in despatches and the respect of his peers and superiors. This is one of those books that reaches out beyond a traditional readership of naval warfare enthusiasts. It is not the easiest task for a son to write about a dead father, but this is an example of how it can be done and done well. It is more than a factual account of a very brave young man and his comrades, displaying affection, respect, love, and a deep understanding. Highly recommended – page turner...

... The author has given a compelling account of the life of one Coastal Forces skipper. The text reads well and there is good illustration in support. As with all good biographies the book starts the story with the description of youth, family and education, followed by the extreme life that was war at sea. The author has been ably assisted by the diary kept by his father.

This book has been expertly put together and is a story well told, by farther and by son, which should be remembered for years to come.

A worthy memorial to a brave and resourceful officer. This is a great story demonstrating the highest values of initiative, determination, loyalty and courage. The passage of 70 years does not detract from its impact.

'The wartime exploits of Robert Hichens show that it is still possible for men of common sense and determination to bring about fundamental changes in doctrine, training and technology'.

The Mail on Sunday, James Dellingpole

'Gunboat Command, written by Hich's son, provides a thrilling read of naval warfare and is a tribute to an exceptional man'

'Given the volume of excellent books published about war in the Narrow Seas, it is difficult to imagine there is a niche for another, but Antony Hichens has written a readable and informative book'

'For the non-specialist, the book is a gripping read'

The author is to be congratulated on writing a book that is a worthy tribute to all who served in Coastal Forces.

...more than a thrilling read of naval warfare...