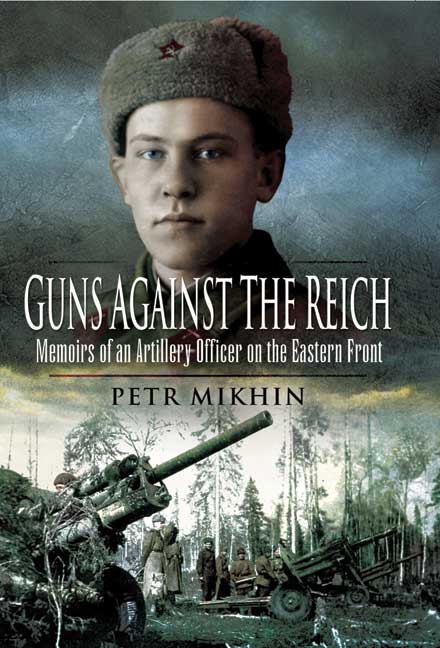 Guns Against The Reich (Kindle)

Memoirs of an Artillery Officer on the Eastern Front

Click here for help on how to download our eBooks
Add to Basket
Add to Wishlist
You'll be £4.99 closer to your next £10.00 credit when you purchase Guns Against The Reich. What's this?
Need a currency converter? Check XE.com for live rates

In three years of war on the Eastern Front - from the desperate defence of Moscow, through the epic struggles at Stalingrad and Kursk to the final offensives in central Europe - artilleryman Petr Mikhin experienced the full horror of battle. In this vivid memoir he recalls distant but deadly duels with German guns, close-quarter hand-to-hand combat, and murderous mortar and tank attacks, and he remembers the pity of defeat and the grief that accompanied victories that cost of thousands of lives. He was wounded and shell-shocked, he saw his comrades killed and was nearly captured, and he was threatened with the disgrace of a court martial. For years he lived with the constant strain of combat and the ever-present possibility of death. And he recalls his experiences with a candour and an immediacy that brings the war on the Eastern Front - a war of immense scale and intensity - dramatically to life.
Petr Alexeevich Mikhin trained as a schoolteacher before the Second World War and served as an artillery man throughout the conflict. He fought the German army in the battles for Stalingrad, Kursk, Ukraine, Moldova, Rumania, Bulgaria, Yugoslavia, Hungary, Austria and Czechoslovakia, and late in the war he was transferred to the Far East to fight the Japanese army in China. He was wounded three times and suffered shell shock, and he finished the war as a highly decorated officer with the rank of a captain. After the war he returned to teaching mathematics in civil and military schools, and he retired as a lieutenant colonel. Petr Mikhin is the author of numerous short stories and three books, all of them based on his extraordinary wartime experiences.

The book is a fast-paced, interesting read that recounts stories of courage under fire and dedication to duty. In addition, Mikhin reinforces many concepts crucial to all levels of warfare such as initiative, technical and tactical competence and shows the importance of understanding and respecting your "evil, cunning, agile, technically educated, tough, and arrogant" enemy. I highly recommend this book.

This powerful autobiography from a Russian veteran of Stalingrad, Kursk and numerous other battles is a lively account of his experiences in the 1028th Artillery Regiment (even the title tells the reader something about the scale of the conflict) as he fought his way from Moscow to Vienna. Great credit must go both to the translator from the Russian and the creator of the English text, as the story really rattles along, and it is possible to get a real feel for the narrator and his comrades. On the defence he lived a dugout life similar to that of WW1, on the offensive there are plenty of indications of high morale and the cheeky, if often black humour, of the military life.
There is a section of black-and-white photographs showing the main protaganists and some of the weaponry used (although the picture entitled 'Repairing the recuperator mechanism of a 122mm M-30 howitzer' is only for spotters!). I could have done with some maps, not least because I cannot call to mind the geography of vast swathes of Russia and Eastern Europe immediately, although a reader could find them elsewhere, I accept. Overall, this is very nice production and testimony to a very brave man. He was a teacher before the war, the profession he returned to afterwards, he was wounded three times and suffered from shell-shock; his humanity springs out the pages as he did his duty for his country.

Petr Mikhin served as an artillery officer in the Red Army, joining the army soon after the German invasion of the Soviet Union, and remaining on the front line until the end of the war. Mikhin took part in some of the most important battles on the Eastern Front. His first combat experience came in front of Moscow. His unit then took part in the final stages of the fighting around Stalingrad, the battle of Kursk and the advance into central Europe, ending the war close to Prague.

This is the sort of book that simply couldn't have been written before the fall of the Soviet Union. Mikhin is often very critical of the political officers attached to his unit, very few of whom appear to have come anywhere near the fighting. There is also an account of Mikhin's close encounter with official paranoia - a court martial that came after his guns were destroyed by the Germans and would have almost certainly have ended in his being found guilty if he had not led a small party on a daring raid to recover the lost guns.

Mikhin's memoirs give us a very valuable picture of life in the Red Army during four years of intense non-stop fighting against a determined and skilled enemy. This allows us to follow the evolution of the Red Army from the nearly defeated force of 1941 to the skilled military machine of 1945, and helps illuminate the price that the Soviet soldiers paid for victory.

Mikhin was a school teacher at the beginning of the Second World War. Conscripted in 1941 and rushed through training, he became an artillery officer in the Red Army and fought on the Eastern Front at the battles of Stalingrad, Kharkov and Kursk. As an artillery observer he experienced the scale and intensity of war and the destructive power of weapons on the battlefield. Conflict is brought to life as Mikhin recounts his involvement with candour and spontaneity and details his personal conflicts with senior Russian officers. Absorbing and easy to read, Guns Against the Reich is written with humour.

The real value of this book is the valuable insight that it gives us into life on the eastern front. Perhaps in the west we have not heard too much about the social history of the Russian Soldier of the Second World War.