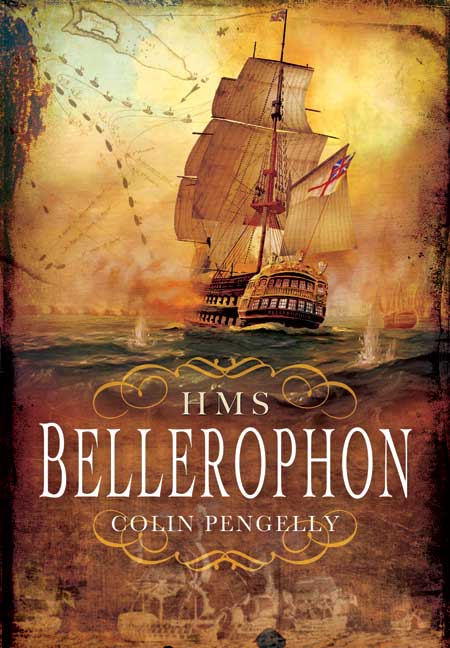 Add to Basket
Add to Wishlist
You'll be £19.99 closer to your next £10.00 credit when you purchase HMS Bellerophon. What's this?
+£4.50 UK Delivery or free UK delivery if order is over £35
(click here for international delivery rates)

Order within the next 10 hours, 6 minutes to get your order processed the next working day!

The story of HMS Bellerophon is a record of the many and varied duties which the Royal Navy had to carry out in the period 1793 – 1815. It was involved in the first great fleet action of the War and was involved in the last moments of the struggle with the surrender of Napoleon.

The 74-gun ship was the standard unit in the line of battle, Bellerophon was one of the most distinguished with a fine fighting record. Having fought at 'The Glorious First of June'; the battle of the Nile and at Trafalgar the ship saw more than her share of fierce ship-to-ship encounters. In between there were the varying duties of blockade and escort carried out with service in the Channel, the Mediterranean, the North Sea, the Baltic and the West Indies. The ship saw every type of service which fell to the Navy in that period.

All the many and various aspects of the ship's life are covered from construction through maintenance and refits to final disposal. Sadly the ship could not be been saved like Victory and the ship and her fine record were confined to the history books.

Although this book is now nearly fifty years old, it still stands up as a good history of one of the most famous Napoleonic warships.

[A]n excellent reference guide for those looking for information on this famous ship and her history in that pivotal era in history. ... I really enjoyed the insight into life onboard a ship during this era and the history of the battle of Trafalgar. If you enjoy a good read and even if you are not a huge fan of this era of sailing ships, HMS Bellerophon is a great book.

This is a book that every enthusiast for the period and the war at sea will want to add to their library, but it is also a fine account of long and dedicated service that must reach a wider readership.

Author Pengelly covers the many and various aspects of the ship's life from construction through maintenance and refits, action against the enemy, to her final disposal.