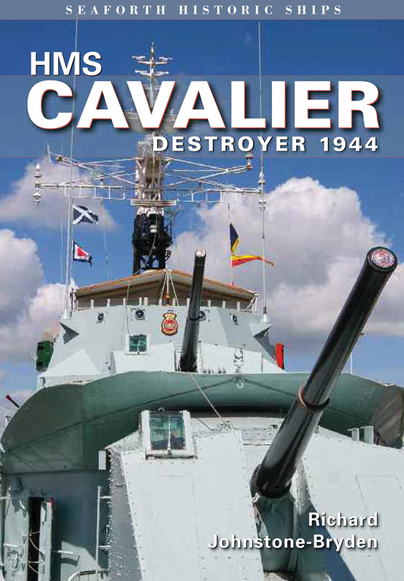 As seen in Warships magazine

You'll be £5.99 closer to your next £10.00 credit when you purchase HMS Cavalier: Destroyer 1944. What's this?
Need a currency converter? Check XE.com for live rates

HMS Cavalier is a 'C'-Class destroyer, one of 96 War Emergency Programme destroyers that were ordered between 1940 and 1942. She saw action on convoy duty off Russia, and later, in 1945, was sent to the Far East where she provided naval gunfire support during the battle of Surabaya. She continued with the British Pacific Fleet until May 1946. Now designated as a war memorial to the 142 RN destroyers and 11,000 men lost during WWII, she is on display at Chatham Historic Dockyard.
As is the case for many museum ships there is a surprising shortage of informative and well illustrated guides, for reference during a visit or for research by enthusiasts - ship modellers, naval buffs, historians or students. This book, in the Seaforth Historic Ship series, redresses the gap.
Containing more than 200 specially commissioned photographs, the book takes the reader on a superbly illustrated tour of the ship, from bow to stern and deck by deck. Significant parts of the vessel – for example, the gun turrets and engine rooms – are given detailed coverage both in words and pictures, so that the reader has at hand the most complete visual record and explanation of the ship that exists. In addition, the importance of the ship, both in her own time and now as a museum vessel, is explained. No other book offers such superb visual impact nor brings the ship so vividly to life.

Overall, this book cannot be too highly recommended. If a visit to Chatham is not possible, buy a copy; if a visit can be arranged, buy a copy anyway, both as a guide and
a souvenir.

Great Britain has made a very poor job of preserving its historic warships. This is all the more amazing in view of the immense contribution made by the Royal Navy to the growth of Great Britain and the establishment of the first truly global Empire, linked by the sea routes, protected by RN warships. This delightful book provides a beautifully illustrated review of the only WWII RN destroyer to be preserved for future generations to visit. The work is lavishly illustrated, in full colour, through the body of the book and could be considered a photo essay, although it contains a great deal of information also in text. Affordable and enjoyable, strongly recommended.

The excellent photography provides a complete interior and exterior guide to a beautiful example of fighting steel.

HMS Cavalier is the only surviving example of the War Emergency Destroyers built for the Royal Navy during WW2, and being completed right at the end of the war. Going through a life mixed with being laid up and then re-commissioned, she was finally withdrawn from service in 1972. Initially preserved as a museum ship on the Tyne, that first attempt to save her was eventually unsuccessful and she was finally brought down to the Historic Dockyard at Chatham where she has been restored to a fine condition and is on display to the public as a museum ship, the only one of her kind left from WW2. In this she sits as a memorial to all those who served in RN Destroyers during WW2.

The book gives the history of the ship and the various stages of her life story, including some background information on the dockyard at Chatham where she now lives. To accompany this though, and filling the majority of the book, is an excellent collection of colour photos showing the ship in detail, both inside and out. While some of the equipment on board is post-war (such as Seacat missiles) much of it is still very much as she would have been to those men who served in them during the war. Plenty of detailed photos showing all the elements for the hull and superstructure while inside we see crew accommodation, the smart wardroom for the officers, the control room, ammunition storage and shell hoists along with much more. If you visit the ship this will be a great reminder of your trip, and if you haven't, then it may well encourage you to go and pay the museum a visit. For modellers it is packed with super visual references for detail of the various fittings as well as the mix of colours to be found on what you might have considered to be just a plain grey ship. There is detail of the open bridge, the Squid anti-submarine weapon, the main armament along with the 40mm Bofors AA guns. All the photos are well captioned with lots of additional information that is of interest.

A fine reminder of this last of the Royal Navy wartime destroyers, and it is following in wake of the success of HMS Belfast being open as a museum ship in the heart of London. Well done to the trust for looking after her as she is today and keeping her legacy alive.

There are nearly 100 pages of high quality colour photographs of the ship which comprise not just a technical record, but a wonderful social commentary of what life was like afloat in the post war Royal Navy. The photos, accompanied by good descriptions, are a wonderful trip down memory lane... it strikes the right balance between nostalgia and detail... Thoroughly recommended.

A fitting graphic and textual record of Britain's sole remaining WWII destroyer. It will appeal to all those interested in the warships of WWII and beyond