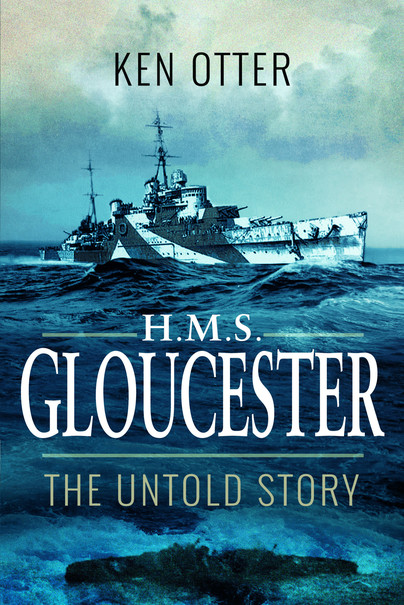 Click here for help on how to download our eBooks
Add to Basket
Add to Wishlist
You'll be £4.99 closer to your next £10.00 credit when you purchase HMS Gloucester. What's this?
Need a currency converter? Check XE.com for live rates

On 22 May 1941, The cruiser HMS Gloucester ('The Fighting G’) was sunk by aircraft of the Luftwaffe during the Battle of Crete. Of her crew of 810 men, only 83 survived to come home at the end of the War in 1945. It is unknown how many of the men went down with the ship and how many died in the sea. Clinging to rafts and flotsam, the survivors hung on for almost 24 hours before finally being rescued by German boats searching for their own men who had been victims of a previous British naval attack. The fact that Allied destroyers were in the proximity but were recalled from the rescue mission was a serious omission of fleet command which cost the lives of hundreds of men. Gloucester had been dangerously low on anti-aircraft ammunition and her crew exhausted before being despatched away from the main fleet to assist the stricken destroyer HMS Greyhound. With only HMS Fiji as company, she came under attack from German bombers and, when Gloucester’s ammunition was finally exhausted, she suffered several direct hits and was soon ablaze from stem to stern and left out of control.

This book explores the ship’s history and operational successes from her launching in 1937 to her tragic demise. It includes vivid first-hand accounts from the surviving crew and the author’s painstaking research has revealed the awful truth about one of the Royal Navy’s greatest disasters during the Second World War.

It includes vivid first-hand accounts from the surviving crew, and the author's painstaking research has revealed the awful truth about one of the Royal Navy's worst disasters during World War II.

A compilation and skillfully constructed narrative, but most important, a memorial to the 810 men from the far reach of the British Commonwealth who served on HMS Gloucester. Ken Otter’s book is like a fine documentary film, at times sensitive, graphic, compelling, and (for this reviewer) with unforeseen impact. The author succeeded in writing a short but powerful memoir about a ship that was tragically, and arguably, needlessly lost and her crew of mostly ordinary men who at times acted heroically during trying circumstances.

A well researched and well written account of a wartime tragedy. A good read and recommended.

In my opinion this is a superb read. As stated above it is the story of HMS GLOUCESTER from construction to sinking. A harrowing story of endless days fighting, of having to abandon ship, survival, waiting for rescue and appalling treatment as Prisoners Of War as told by survivors. This is a ‘difficult to put down‘ book.

It goes on to detail events surrounding the loss of Gloucester and the context of British destroyers intercepting a group of caiques that were carrying German troops to Crete and sinking many of them. Gloucester herself got to the point where after constant action she ran out of high angle AA ammunition and Luftwaffe attacks continued, partly driven by a desire to hit back for their own troop losses. When the ship went down no British ships reached the survivors, but the following day, German vessels searching for their own survivors found them. The final elements on the book tell the story of their reception back on land and their time as POWs before going on to tell of their final return home at the end of the war and the return of 3 aged survivors to the Greek island of Kythira back in 1998.
Packed with personal accounts and letters there are archive photos and portraits liberally sprinkled throughout the book, a testament to the author's dedication to unravelling the story surrounding the death of his own father in the loss of HMS Gloucester.

The author’s father was one of the many casualties, killed when the ship sank. – This is a long-overdue review of the events that led to the loss of HMS Gloucester, from the launching in 1937 to the sinking in 1941 – Highly Recommended.

Books are wonderful things, because they can convey such different meanings, and provide the reader with different feelings. I found this book very emotional to read, and it left me feeling sad, angry, humble and wiser all in one go.

This book is a reprint of the original 1999 book of the same name written by the author, who had an emotional tie to H.M.S. Gloucester, as his father served aboard her and died when he was sunk in 1941. The book contains twenty-four chapters, telling the story chronologically of the life and death of this British cruiser. Built in Devonport Dockyard just before the Second World War, H.M.S. Gloucester sailed for the Indian Ocean, and then early in the war, was directed to the Mediterranean.

The entry of Italy into the war in June 1940, following the fall of France, changed the narrative of the war significantly. With Western Europe conquered, and an invasion of the U.K. out to one side, the Mediterranean and surrounding countries became the principal battleground between Italy and Germany, against the U.K. and its Dominions. H.M.S. Gloucester was in the forefront of this action, being kept very busy, as naval tasking required at this early period of the war.

H.M.S. Gloucester fell victim to aerial attack, the reality of which is graphically captured by the author. The sinking of H.M.S. Southampton and H.M.S. Gloucester is told in a manner that left me, as the reader, cold and horrified at the reality of the circumstances. The author uses both official accounts, and the accounts of several men who served on board the warship, to provide a complete account of the sinking, and subsequent survival of the few men who were picked up by the Germans. The role of the Greeks is interesting, as they attempted to assist the British sailors, and the behaviour of the Germans who nearly shot several survivors, because of what they saw as the massacre of their men in the water following the action of the Royal Navy against an invasion convoy.

In conclusion, to me this is a powerful book. I learnt a lot from reading it, and it made me consider several aspects of naval warfare, and the moral dilemmas that exist in war. It also made me realise that the dividing line between life and death is very fine. Overall, I am pleased it has been reprinted, it certainly deserves to be. I recommend it highly to anyone interested in naval warfare, and the Mediterranean in particular.