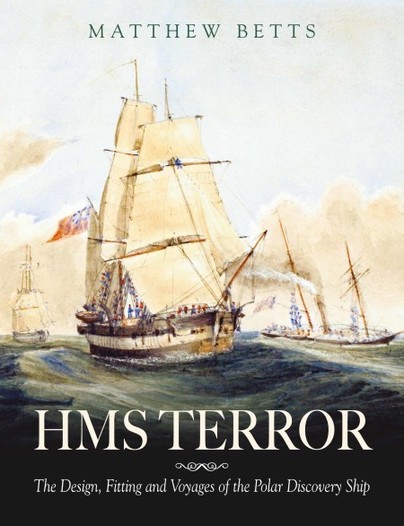 The Design, Fitting and Voyages of the Polar Discovery Ship

'Terror is a fine book. With patient and impeccable research Matthew Betts has re-created, literally at times, a ship that saw more action and adventure than almost any other vessel of its time. He lays out with great clarity and authority, everything you want to know, and everything you ought to know about one of the great unsung heroic ships of Britain’s naval history'.

You'll be £15.59 closer to your next £10.00 credit when you purchase HMS Terror. What's this?
Need a currency converter? Check XE.com for live rates

In the summer of 1845, Sir John Franklin and a crew of 134 men entered Lancaster Sound on board HMS Erebus and HMS Terror in search of a Northwest Passage. The sturdy former bomb ships were substantially strengthened and fitted with the latest technologies for polar service and, at the time, were the most advanced sailing vessels developed for Polar exploration. Both ships, but especially HMS Terror, had already proven their capabilities in the Arctic and Antarctic. With such sophisticated, rugged, and successful vessels, victory over the Northwest Passage seemed inevitable, yet the entire crew vanished, and the ships were never seen again by Europeans.

Finally, in 2014, the wreck of HMS Erebus was discovered by Parks Canada. Two years later, the wreck of HMS Terror was found, sitting upright, in near pristine condition. The extraordinarily well-preserved state and location of the ships, so far south of their last reported position, raises questions about the role they played in the tragedy. Did the extraordinary capabilities of the ships in fact contribute to the disaster? Never before has the Franklin Mystery been comprehensively examined through the lens of its sailing technology.

This book documents the history, design, modification, and fitting of HMS Terror, one of the world’s most successful polar exploration vessels. Part historical narrative and part technical design manual, this book provides, for the first time, a complete account of Terror’s unique career, as well as an assessment of her sailing abilities in polar conditions, a record of her design specifications, and a full set of accurate plans of her final 1845 configuration. Based on meticulous historical research, the book details the ship's every bolt and belaying pin, and ends with the discovery and identification of the wreck in 2016, explaining how the successes and ice-worthiness of Terror may have contributed to the Franklin disaster itself. It is an ideal reference for those interested in the Franklin Mystery, in polar exploration, the Royal Navy, and in ship design and modelling.

"Dr. Betts has honed his analytic deftness and eye for detail acquired as a professional archaeologist, and enhanced them with the precision required by his hobby as a modelmaker. To these skills, he now adds storyteller and writer to produce this passionate biography of an interesting and significant ship."

DR MATTHEW BETTS is an internationally recognised expert on Sir John Franklin’s ships, and is an active consultant with Parks Canada, which discovered the wrecks. He has contributed to major documentaries on the expedition and recently acted as an historical advisor for the first season of AMC’s major historical drama, The Terror. His model and plans of HMS Terror have been showcased in exhibitions at the National Maritime Museum, the Canadian Museum of History, and Mystic Seaport Museum. Dr Betts is currently a curator of archaeology at the Canadian Museum of History.