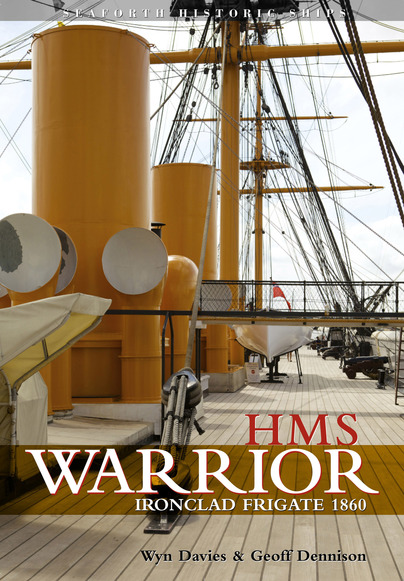 Click here for help on how to download our eBooks
Add to Basket
Add to Wishlist
You'll be £8.99 closer to your next £10.00 credit when you purchase HMS Warrior. What's this?
Need a currency converter? Check XE.com for live rates

HMS Warrior, launched in 1860, was the first iron-hulled, sea-going armoured ship, and for many years was the most powerful warship in the world. Rescued a century later from her role as a refuelling hulk, she became the object of the most ambitious ship restoration project ever mounted and is now afloat and open to visitors at Portsmouth.

As is the case for many historic ships, however, there is a surprising shortage of informative and well illustrated guides, for reference during a visit or for research by enthusiasts – ship modellers, naval buffs, technical historians or students. This new series redresses the gap.

Written by experts and containing more than 200 specially commissioned photographs, each title takes the reader on a superbly illustrated tour of the ship, deck by deck. Significant parts of the vessel – for example, the steering gear, armament and armour, engine-room and gundeck – are given detailed coverage so that the reader has at hand the most complete visual record and explanation of the ship that is at present available.

In addition, the importance of the ship, both in her own time and now as a museum vessel, is explained, while her design and build, her service career and her life prior to restoration and exhibition are all described.

The Seaforth Historic Ship Series is a truly groundbreaking concept, bringing the ships of our past vividly to life.


This book takes the reader on a well-illustrated tour of the ship as she is today, deck by deck, and with significant parts of the vessel. It includes a historical introduction looking at the ship and her significance, an explanation of her design and construction, and quick reference deck plans, but the bulk of the 128-page book comprises the 200 specially commissioned and well-captioned photographs illustrating both her exterior and interior.

The book, the second in the Seaforth Historic Ships series, takes the reader on a well-illustrated tour of the ships as she is today, deck by deck, and with significant parts of the vessel, such as the steering gear, armament and armour, engine room and gundeck, being covered in detail. The bulk of the 128 page-page book compromises the 200 specially commissioned well-captioned photographs illustrating both her exterior and interior.

A beautiful publication…at an affordable price for the richness of its contents.

This is a really good book and is highly recommended.

Focuses on the world's first iron hulled warship. The frigate was bigger and faster than any other warship when commissioned but within a decade was obsolete. In this guide, we are provided with a thorough introductory section and Geoff Dennison has provided an impressive selection of images, including atmospheric views of Warrior's ghostly machinery spaces.

Lavishly illustrated with hundreds of coloured photographs...a boon to any modeller.

WYNFORD DAVIES specialises in commercial maritime projects and heritage work, and current projects include the restoration of the Medway Queen, a Dunkirk veteran, the submarine Alliance and the White Star Line tender, the Nomadic. Since 1998 he has been a member of the Heritage Lottery Fund’s panel of expert advisors and a monitor for several of their maritime projects, including a major renewal of the main deck of HMS Warrior