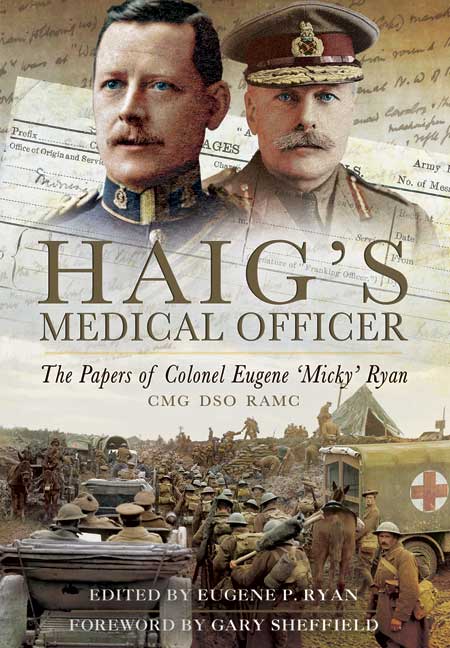 Click here for help on how to download our eBooks
Add to Basket
Add to Wishlist
You'll be £4.99 closer to your next £10.00 credit when you purchase Haig's Medical Officer. What's this?
Need a currency converter? Check XE.com for live rates

Despite countless conflicting assessments, Field Marshal Douglas Haig remains one of the most controversial and fascinating characters in British military history. To some he was a mindless butcher, to others a true patriot who masterminded Allied victory in the First World War under the most trying circumstances.

The papers of Colonel Eugene 'Micky' Ryan, Haig's long serving doctor and confidant, are a significant find as they throw fresh and invaluable light on the life and character of this enigmatic man. Ryan studied medicine at Cork and Edinburgh. He was commissioned into the RAMC in 1901 and saw active service in South Africa. He first met Haig in 1912 and became Medical Officer to Haig's HQ 1st Corps in 1914 and moved with him to 1st Army that December. Ryan saw service commanding two Casualty Clearing Stations before being appointed Medical Officer to the C in C (Haig) in September 1916.

Haig's and Ryan's relationship, while primarily professional, blossomed into a friendship of mutual respect and trust which lasted until Haig's death in 1928. Ryan delivered the Haigs' long awaited heir, Dawyck, in 1918 and advised during Dorothy Haig's illness in 1926.

Fortunately Ryan kept meticulous diaries which, written from such a unique viewpoint and with constant reference to Haig and his family, are of historical importance: the Foreword, written by Professor Gary Sheffield – a leading authority on Haig's life and work, attests to their significance.

As seen in Britain at War Magazine, January 2014


Eugene P Ryan, the editor, has clearly approached the task of presenting his grandfather's papers with a realistic view of their readability and the amount of material available, providing historical, contextual and biographical notes, often from primary sources that allow the general reader to place the detail in the course of wider events. Haig himself, in his diaries, writes in a longer style and is quoted extensively in this book, as are other Headquarters staff, cross-referencing and giving context to Ryan's papers. Occasionally reiterating the same point, but always informative, the editor weaves a detailed narrative that is clearly the result of extensive research and personal interest...

... Throughout, the editor has taken pains to draw out every reference to Ryan's relationship with Haig, which encompasses looking after his wife, children and “bullying” Haig into taking rest breaks during the height of the war. One is left with an impression of a friendship that was based on absolute trust and faith in each other's professional abilities.

Eugene P Ryan has made a useful contribution to the canon of works relating to senior officers in the war and has provided more material for those particularly interested in Haig. As an insight into the management Royal Army Medical Corps, it provides a tantalising glimpse into an under-researched area. He has navigated skilfully the twin demands of presenting and interpreting a primary historical source whilst interpreting it for the reader, all the while retaining the integrity of the original materials.

Eugene ‘Micky’ Ryan had a long and distinguished career with the Royal Army Medical Corps, seeing active service in the South African War as well as the First World War. He met Douglas Haig in 1912, and in December 1916 was made his personal Medical Officer, treating not only Haig but his family as well. The two men developed a close bond that was to last until Haig’s death in 1928. Ryan was a prolific writer during the war, sending regular letter homes as well as keeping a personal diary. These form the basis of this book...

...The letters and diary entries paint a personal, first-hand picture of Haig that can be difficult to glean from other sources...

...This is an interesting book and one that can deservedly claim to be ‘unique’ amongst the veritable flood of memoirs and personal accounts currently available. As well as depicting a more personal side of Douglas Haig that challenges some of the preconceptions that are often held about him, the book also provides an interesting account of one man’s war and how he conveyed his wartime experiences to his family back home..

As featured in The Irish Times.

I found “Haig’s Medical Officer” a good and very interesting read. It is well illustrated with copies of extracts from the diary and other documents, together with many portrait photographs and images of places both contemporary and modern. In particular there are some very good images of 18 Casualty Clearing Station at Lapugnoy when Ryan was there. Inevitably an editor of a diary has to explain some background and context, and grandson Eugene does this well, without swamping the original text.