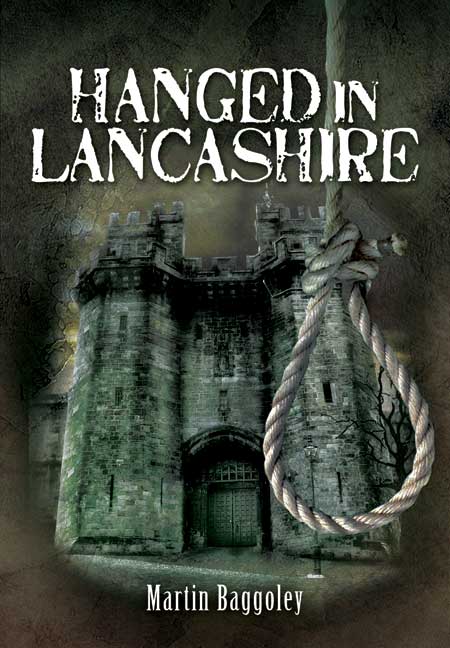 Click here for help on how to download our eBooks
Add to Basket
Add to Wishlist
You'll be £4.99 closer to your next £10.00 credit when you purchase Hanged in Lancashire. What's this?
Need a currency converter? Check XE.com for live rates

This account of executions in Lancashire spans two centuries and begins in the era of the Bloody Code. In the closing years of the eighteenth century there were over 200 capital crimes and the early chapters discuss those condemned to death for highway robbery, croft breaking, riot and sodomy. As the nineteenth century progressed for which the death penalty could be imposed decreased, until - with the exception of treason and piracy - only murderers faced the noose. The author has selected chapters that discuss botched hangings and possible miscarriages of justice, and ends with a chapter devoted to the last two men to be executed in this country, in 1964. A compelling read for anyone interested in local and social history, written by an experienced criminal historian.

Martin Baggoley was born in Eccles and after working as a civil servant trained as a probation officer, working for the last 33 years in the Manchester area. He gained a masters degree in criminology and has written on the history of crime and punishment for a number of publications in the UK and USA. His other books for Wharncliffe are Foul Deeds & Suspicious Deaths in Manchester and Strangeways: A Century of Hangings in Manchester. Now semi-retired, he lives with his family in Ramsbottom.

Using wealth of research, illustrations from local papers, original photographs, letters and even a route plan from one of the crimes, Baggoley has unearthed some fascinating and gruesome cases.

'Hanged in Lancashire' provides a series of intriguing case studies regarding those executed for capital crimes in Lancashire between 1790, when over 200 offences were punishable by death under the 'Bloody Code', and 1964, when the last two criminals to be executed in Britain were hanged in Liverpool and Manchester. An experienced crime writer, Baggoley's selection of hangings forms a catalogue of murder, burgalry, highway robbery, sodomy and forgery, with each case revealing not only the basic human motivations behind the crimes committed, but also the changing social view of capital punishment, charting the gradual suppression of the hangman's noose in favour of less drastic deterrents.

Fumbled hangings and debatable verdicts of justice are at the forefront of this read. With over 200 hundred capital crimes towards the latter years of the eighteenth century, those which were punishable by death even included croft breaking, riot, sodomy, and highway robbery. However, the nineteenth century progressively saw the depletion of the number of crimes capitally punishable - so much so that only those who committed murder would inevitably face the penalty of a hanging. Beginning in the era of the Bloody Code, and concluding with closing chapters devoted to the final two men to be executed in this country, in 1964, Baggoley provides a captivating read for any reader intrigued by, or studying, Lancashire's gruesome history.

Without doubt Martin Baggoley is one of the very best writers from the Wharncliffe stable. 'Hanged in Lancashire', unlike the Fould Deeds series encompasses a much broader geographical area and is therefore able to cover a more interesting selection of cases.

There is enough of a variety of cases to appeal to the crime historian, true crime book collector, social historian and local interest reader.

The book is full of useful and relevant illustrations which help to set the scenes. Baggoley also uses good source material, particularly from the central libraries of Manchester and Liverpool. He also provides an all important index.

Overall "Hanged in Lancashire' is a very good read.

Martin Baggoley is an experienced true crime author and has a masters in criminology.

The book is a detailed account of crime and capital punishment, taking the reader from the days of the 1700's when felons were publically hanged outside the walls of Lancaster Castle, in front of large crowds, through to 1964 when the last two people were executed for murder inside the goals of Liverpool and Manchester.

The book covers many intriguing cases, that include botched hangings and possible miscarriages of justice.

Hanged in Lancashire is another in the Foul Deeds and Suspicious Deaths series which will be of particular appeal to those interested in learning more about the dark social history of the area. Martin Baggoley is an experienced historian and, perhaps just as importantly, has lived and worked in the area for most of his adult life. The scores of cases discussed here span a broad time period, interestingly concluding with 'The Final Act', the story of two men who became the last to hang in the country when they were simultaneously executed in Lancashire in August 1964. Along the way we are treated to a variety of other stories from across the region, beginning as early as the 18th century. Each piece is relatively concise and is told in a remarkably calm and methodical way considering the subject matter at hand - Baggoley does well to present the cases in as strictly factual a way as possible without a need to 'dress up' or over-dramatize events which prove fascinating enough of their own accord. These include the famous Pendleton murders, Luddite riots, and Lancashire's last public hangings in 1867. The chronological nature of the book makes it interesting to observe the changing social attitudes towards execution and hanging over the years; as the author himself notes, hangings gradually ceased to be public spectacles and suitable punishment only for crimes of murder or treason. Therefore we have a book not only packed with interesting individual stories but which touches on the controversy of capital punishment in a wider social context.

Using a wealth of research, illustrations from local papers, contemporary photographs, letters and even a rout plan from one of the crimes, Baggoley has unearthed some fascinating and gruesome cases from Lancashire's dark history. A gripping story of murders most horrid...