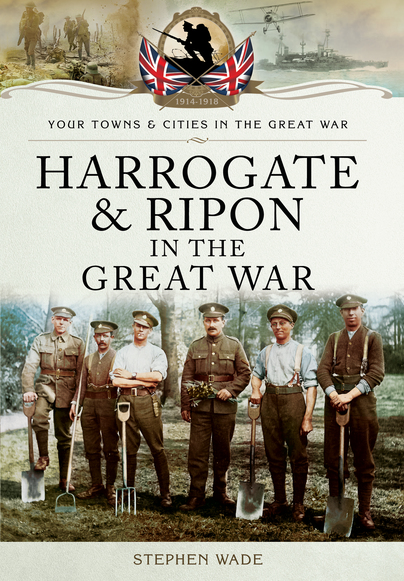 Harrogate and Ripon in the Great War (Kindle)

Click here for help on how to download our eBooks
Add to Basket
Add to Wishlist
You'll be £4.99 closer to your next £10.00 credit when you purchase Harrogate and Ripon in the Great War. What's this?
Need a currency converter? Check XE.com for live rates

Harrogate and Ripon, just a few miles apart in one of the most beautiful localities in Yorkshire, have rarely had their contributions to the Great War told all together, in one volume. Stephen Wade has written an account of their importance, from the Ripon camps, where thousands of infantrymen for Kitchener’s new Pals’ Battalions were trained, to the many Harrogate hospitals where casualties were cared for. Added to this are stories of local individuals, at home and in the European theatre of war, who played their part in this massive conflict.

Harrogate and Ripon,made the usual contributions to the war effort, raising money and making food, but the local people experienced many of the significant Yorkshire events of the war, such as the explosion at Barnbow munitions factory and the housing of Belgian refugees.

The book tells the stories of not only the heroes, such as Betty Stevenson and Donald Bell VC, but of the ordinary Yorkshire folk who endured the hardships and made great sacrifices.

The book provides ample evidence that Harrogate and Ripon, along with their surrounding areas, have a fine record for courage and determination during the First World War.

This book is notable among others I have read in the series for its very detailed list of sources, including printed and websites, in bibliography.

Part of the ever expanding Towns & Cities in the Great War series. This volume tells the story of both Harrogate and Ripon in one of the most picturesque parts of North Yorkshire. Thousands of men passed through Ripon's camps, most being trained for the new Kitchener battalions, while Harrogate's hospitals played a vital role in caring for the wounded and injured. Well written history.

Another volume in Pen and Sword's superb series on towns and cities and how they coped during the Great War - full of local personalities, excellent range of photos and facts that will engage and inform people of Harrogate and Ripon.