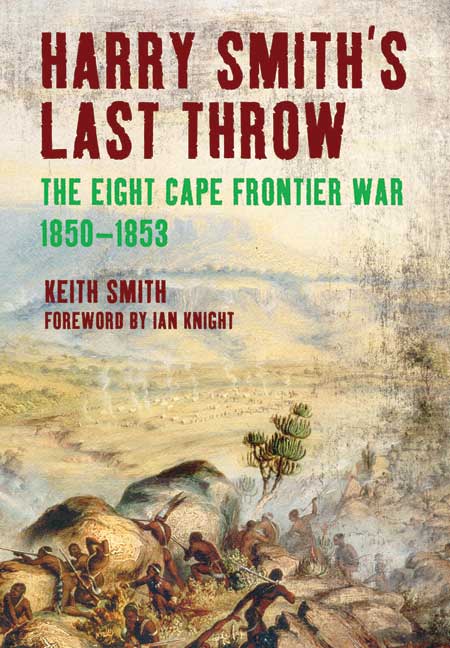 Click here for help on how to download our eBooks
Add to Basket
Add to Wishlist
You'll be £4.99 closer to your next £10.00 credit when you purchase Harry Smith's Last Throw. What's this?
Need a currency converter? Check XE.com for live rates

This important new book tells the harrowing story of the Eighth Frontier War against the Xhosa people of the Eastern Cape, often from the viewpoint of those actually doing the fighting. It was the longest of those wars and it was to be followed by the Ninth, and last, in 1877–1878. By that time there remained little of the Xhosa lands which they had once called their own, the extent of which had been eroded after almost every war. This desperate struggle for land invoked an increasingly brutal style of warfare. The Xhosa had previously fought with some chivalry, refusing to make war on women and children, just as they had in their own internecine wars. The Eighth War changed all that and vicious killings were perpetrated by both sides – black and white.

The 'Harry Smith' of the title is the famous 19th century British soldier, Sir Henry George Wakelyn Smith, who served at the Cape of Good Hope on two occasions. The first was in the years 1828–1835, during which he was second-in-command to Sir Benjamin D'Urban. This ended with Smith departing the Cape under a cloud after his involvement in the murder of the Xhosa paramount chief Hintsa. His second period of service, between 1847 and 1853, was as Sir Harry Smith, baronet, the hero of Aliwal. His appointment then was as Governor and High Commissioner. Although Smith claimed to have ended the Seventh Frontier War in 1847, shortly after his arrival, his greater claim to fame was his management of the Eighth War, which he himself did much to foster.

Harry Smith's Last Throw endeavours to re-evaluate Smith's role as one of the prime causes of the war, and provides a full and engaging account of this important, yet often overlooked, episode in history.