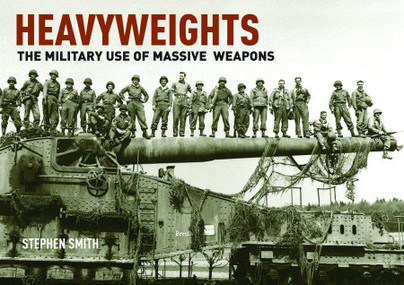 Heavyweights: The Military Use of Massive Weapons (Hardback)

You'll be £25.00 closer to your next £10.00 credit when you purchase Heavyweights: The Military Use of Massive Weapons. What's this?
+£4 UK Delivery or free UK delivery if order is over £30
(click here for international delivery rates)

Delivering the heaviest possible munitions onto the enemy and his strongpoints serves a number of military functions: it destroys protective positions and so is ideal for siege or trench warfare; it kills and maims at a distance without endangering one’s own troops or provides devastating close-range protection against attack; also significant, it saps the enemy’s morale as it searches them out far from the front lines, degrading their performance and reducing their manoeuvrability.

Before the end of the 14th century, strong city walls and castle ramparts were almost impregnable: after the advent of gunpowder even the walls of Constantinople, which had defended the Roman Empire for centuries, fell before the Turkish supercannon. Before long, every army had its artillery train, and a significant point of pride was the largest, most potent of the weapons.

At sea, cannon were the only weapons that could splinter the massive wooden walls of warships in the days of sail, and sea battles continued to see huge weapons employed through to World War II: the 460mm guns of the Yamoto or the 16-inch guns of the ‘Iowa’ class battleships could engage the enemy at 24 miles and the latter saw service into the 1990s. It was only the advent of carrier-based aviation that saw the end of the huge battleships and their strategic importance.

On land, the crucible of war—the Napoleonic wars, US Civil War and the two great world wars—saw heavy weapons develop exponentially: ironshot cannon were replaced by rifled guns and howitzers that could propel increasingly heavy shells, leading to the development of huge mortars, and heavier artillery, eventually so heavy they had to be put on rails—railway guns allowed the speedy movement of weapons that were not only huge in themselves, but also required massive shells and ammunition carriers and reloaders.

Heavyweights examines the use of these massive weapons of war from stone-shot cannon to the atomic artillery of the 1950s. It discusses the way that missiles and air-launched weapons have superseded theatre and strategic artillery. Covering the subject chronologically, each period has a number of case studies: the largest weapons are itemised and their use in wartime documented.

Finally, appendices identify the largest of other guns, hand-held and personal weapons, as well as looking at guns and aircraft.


Provides useful information on the many, many types of weapons covered in the book and as such will make a very useful reference source.

I found a lot of this information new to me and quite fascinating with my metallurgical career as a background and a long standing interest in ballistics.

Artillery pieces tend to be very long and not very high so, rather smartly, the designers of this book have used a letterbox format that perfectly suits the subject. Heavyweights is also a high quality production, with fine, glossy paper and copious illustrations throughout.