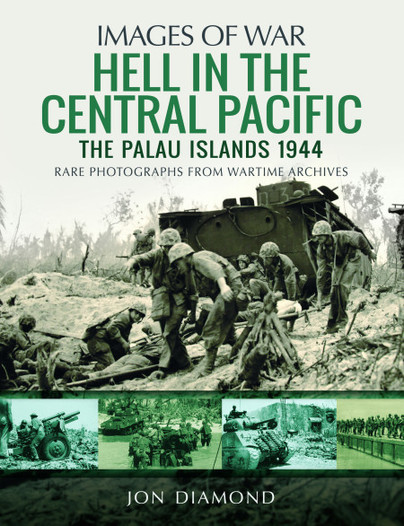 Hell in the Central Pacific 1944 (Kindle)

Click here for help on how to download our eBooks
Add to Basket
Add to Wishlist
You'll be £4.99 closer to your next £10.00 credit when you purchase Hell in the Central Pacific 1944. What's this?
Need a currency converter? Check XE.com for live rates

In September 1944, to prevent Japanese air interdiction against General MacArthur’s planned invasion of the Southern Philippines, the Americans attacked Peleliu and Angaur in the Palau group of the Western Caroline Islands. Admiral Halsey, commanding the US Third Fleet, feared the heavily defended Palaus would be costly for his III Amphibious Corps comprising the 1st Marine Division and the 81st Infantry Division.

While Angaur fell in four days, on Peleliu the Japanese resisted tenaciously using their underground fortifications on the Umurbrogel Ridge overlooking the airfield. It was only after over two months’ bitter fighting that the Americans finally controlled the Island. Despite the heavy cost, the benefits of this hard fought and costly victory were doubtful. In the event, Mindanao and other Southern Philippine Islands were bypassed by MacArthur in favour of a direct assault on Leyte on 20 October. But, as the graphic images and well researched text bear witness, there is no denying the courage and determination shown by the attacking US forces.

"...provides a good look at the fighting in the Palau group and will certainly give readers a thorough understanding of the difficulties of war."

As always, this volume is packed with information, and the visuals make it all very real.

...Depicts the U.S. campaign to invade and capture from the Japanese Palau's Peleliu and Anguar islands in September 1944.

A collection of very instructive and interesting images.

A book that I recommend to historians and novices alike, to understand the ferocity of the fighting in the Pacific islands during the Second World War.

Diamond does a a good job of narrating the campaign and battle, and for those of us in awe of American sacrifice in the island-hopping campaign, that along with the images makes Hell in the Central Pacific a worthwhile addition to our bookshelves.

This book will appeal to historians, military model makers and Wargamers alike. Jon Diamond’s text is both informative and easy to read and his captions accurate and well researched. The selection of photographs is very appropriate and many are new to this reviewer. Highly recommended to all who have an interest in the campaign in the Pacific and American forces in particular.

War out in the Far East is always a fascinating and probably underrepresented part of the conflict. I’m sure the reason is that it is so far away when WW2 happened upon our doorstep. But I also think that the war was so harsh and the fighting intense there, which was why the men who fought out there didn’t like to talk about it when they came back. This book is of the same usual high standard as the rest of the Images of war series, with some powerful photos and images. The book is split into five chapters Strategic Prelude to the Palau Islands Campaign, Terrain, Fortifications and Weapons, Commanders and Combatants, Beach Landings, and Combat on Peleiu. A thoroughly good commentary and historical information accompany all the pages of images, which is all well informed and expertly written. Again there really isn’t anything wrong with this book, it is one of the larger in the series, but that just makes a better experience as you get more book for your money. I’m giving this a 5-star rating as it’s a great read and accompanied by great images.

Another interesting account of a major action within the overall story of the American Island-Hopping Campaign across the Pacific during WW2. Lots of detail in the pictures which many modellers will enjoy, along with informative text on the progress of the campaign.

Overall, it’s an excellent historical reference and serves as a salutary reminder of the reality of combat in the late war South Pacific – five mushroom heads.

The book from pen and sword it's so well written with more pictures than words throughout most of the book, However, there are some chapters like the first couple that are not just interesting but very informative I found myself from time to time pausing to take in the scenes in some of the pictures. It certainly is I book that shows not just the triumph but also of the tragedy and the harrowing images that these young Marines to this day are still carrying with them.
For modellers especially diorama modellers I believe that this book would be extremely helpful in you trying to recreate any of the battles of the central Pacific islands. For enthusiasts in military history then again, this book would be of value to you with its informative professionally written chapters and the huge number of pictures some of which have probably never been seen before I truly recommend this book.

Years ago now, acting on a reference from the late scholar, soldier and author, Paul Fussell, I contacted an American bookseller and bought Eugen B Sledge's 'With the Old Breed'. Sledge had served as a Marine infantryman in the Pacific, fighting the Japanese at Okinawa and Peleliu, and somehow managing to survive. It's a harrowing account and still one of my most treasured books.

'Hell in the Central Pacific' puts into pictures what Sledge put in words, and the next time I re-read Sledge's account I shall have Hell in the Central Pacific next to me. The British Army faced its fearless and ruthless enemy in the jungles of Burma, Malaya and North-east India; for the American infantry though, it was the islands of the Pacific, each one heavily defended and every inch of land hotly contested.

Great photographs, detailed maps and economic text make this a very useful reference work and snapshot of the bitter fighting in this part of the world in 1944.