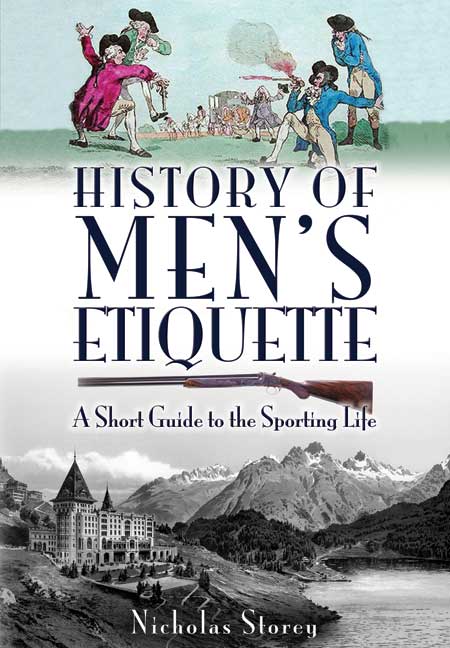 A Short Guide to the Sporting Life

Click here for help on how to download our eBooks
Add to Basket
Add to Wishlist
You'll be £4.99 closer to your next £10.00 credit when you purchase History of Men's Etiquette. What's this?
Need a currency converter? Check XE.com for live rates

This is Nicholas Storey’s third book in the series, following History of Men’s Fashion: What The Well Dressed Man Is Wearing (2008), and History of Men’s Accessories: A Short Guide For Men About Town (2011) and is called History of the Sporting Life: A Short Guide to Some Sports and Pursuits For The Man of The World. This book, also with historical and social background, covers: the conduct of sporting events, including recommendations for a selection of sporting equipment, being all the necessary equipment for: shooting, fishing, hunting, tennis, badminton, squash and golf; something of members’ sports’ clubs; town and country living; town and country national and international sporting and social events and festivals; road, rail and sea travel; as well as exciting or unusual Christmas holiday destinations. In line with the first two books, this one is also packed with quirky facts and interesting digressions; including an account of the peculiar facts surrounding the last recorded civilian duel in England; a sketch of the life and death of Regency figure Robert ‘Curricle’ Coates; even how to build a rose garden; to all of which is once more brought a humorous approach. World experts on the technicalities of certain topics covered have again been sought out to check over the draft to ensure that this book is not just amusing but soundly backed by authority. The book ends with an account of a memorable night spent in London.

A stylishly written book that serves up wit and erudition in equal measure, History of Men’s Etiquette is the third “History of…” title from Nicholas Storey following his examinations of men’s fashion and men’s accessories. Promoted by the publishers as being of interest to all males who like to live life socially and to the full, it is certainly that: but is also has the capacity to enlighten and entertain a far broader readerships…

In line with his first two titles this is also packed with quirky facts and interesting digressions. It covers the basics of the main country sports and sporting equipment including, shooting, shotguns and rifles, fishing, fishing rods and equipment, hunting and hunting gear, tennis, croquet, badminton, squash and members’ clubs. Nicholas also talks about town and country living with some reference to real property and housing, plus further thoughts from his other books on dress sense and town and country sporting events.