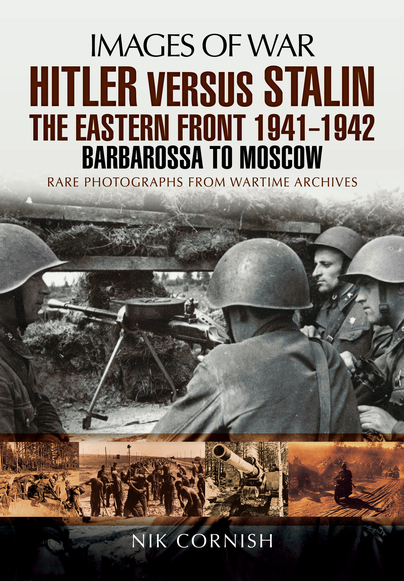 Click here for help on how to download our eBooks
Add to Basket
Add to Wishlist
You'll be £4.99 closer to your next £10.00 credit when you purchase Hitler versus Stalin: The Eastern Front 1941 - 1942. What's this?
Need a currency converter? Check XE.com for live rates

The world was not prepared for the massive onslaught launched by Nazi Germany on the Soviet Union on 22 June 1941 – the scale of the invasion, the speed of the German advance, the hundreds of thousands of Red Army soldiers taken prisoner, the chaotic, headlong retreat of Stalin’s forces eastwards, towards Leningrad and Moscow. But equally it was not prepared for the Soviet fight back. For, despite all the predictions, the Red Army stemmed the Wehrmacht’s advance, held the lines before Leningrad and Moscow, and mounted a counter-offensive that changed the course of the campaign and the outcome of the Second World War. These are the historic events that Nik Cornish portrays in the selection of rare wartime images he’s selected for this graphic history of the war on the Eastern Front.

The key aspects of the opening year of the war are vividly recorded – Operation Barbarossa; the German and Soviet forces as they marched and fought their way across the countryside and through the villages and towns of the Ukraine, Belarus and the Baltic states; the clashes at Brest, Smolensk, Kiev; the failure of Operation Typhoon, the turning point in this phase of the war which denied to Hitler the anticipated quick victory in the East.

Pen and Sword has done some stellar work with its series of the Eastern Front studies and with Nik Cornish’s Hitler versus Stalin has an exceptional text for its Russian front campaign series. At 218 pages Cornish has assembled a concise and fast moving account of the opening moves of the audacious German war plan.

The text is packed full of detail which for the overall length is quite an amazing task, combined with the array of photos which I found to be excellent in their production values as crisp and value adding to their placement. It was even for an Eastern Front historian a great read and one I would highly recommend adding to your individual library. I thoroughly enjoyed the style and flow of Nik’s writing which make the book hard to put down while increasing ones appetite for further study.

Technically the writing gives a solid feel of being there, and the challenges of supply and logistics and the on-set of the infamous Russian winter weather. It’s difficult to explain how cold this theatre was if you haven’t been there to experience it first-hand. Yet the photo selections Cornish has chosen really do a good job in delivering a feel for what it was like.

I would advise any student of this conflict to add this title and combine the Luftwaffe at War series especially the Fighters over Russia and Stukas over the Steppe books. They all add great background and operational detail to this Cornish study and are all exceptionally written.

Surveying such broad operations provides Cornish with more choices when it comes to photographs. His skill lies in marrying those to his lucid narrative.

As with all the IMAGES OF WAR series, the captions are lively and rich in detail presenting the reader with a wealth of information about the history and status of the characters and vehicles depicted in the photographs. The quality of the photographs is also extremely good.

This book offers the modeler a decent number of diorama ideas, from marching infantry, to destroyed tanks and ruined buildings. Highly recommended.

A wonderful photographic history of the first year of the Russian campaign, following the initially triumphant German advance through Ukraine and into the outskirts of Leningrad and Moscow. It is a challenge to condense this immense subject into a book of 128 pages, but in the tradition of the "Images of War" series, each photograph has been carefully selected to provide a snapshot of the unfolding campaign and illustrate, with the assistance of detailed captions, a very broad range of subjects and equipment. Included amongst these are the appalling human cost, with prisoners of war of both sides being marched towards a very uncertain future, and the plight of civilians overtaken by the advance. The book naturally closes with a series of images which capture the chaos of Germany's retreat from Moscow in dreadful winter conditions, but it also includes a chapter which looks as the lesser known contribution of the Western Allies, of aircraft and particularly tanks and other armoured vehicles supplied by the British and Americans to keep the Red Army fighting.

This volume is a more general volume than the Kharkov one and covers the first two years on the Eastern Front with a fine collection of photos.

Another title in the 'Images of War' series from Pen and Sword books, this time from Nik Cornish, and covering the period from the invasion of Russia, to the gates of Moscow in 1942. After the introduction the book holds 9 chapters which cover the early period of the war on the Eastern Front, the time of German successes and Soviet defeats up to the period where things came to a halt. Each chapter is started with a few pages of text to explain it's individual topic, and these are then followed with a set of appropriate archive photos to illustrate the story...

... As ever with this series, each chapter is then wel illustrated with captioned archive photos, and in this case the majority of which I had not seen before, which is always good. All in all another good value for money photo reference in the Images of War series.