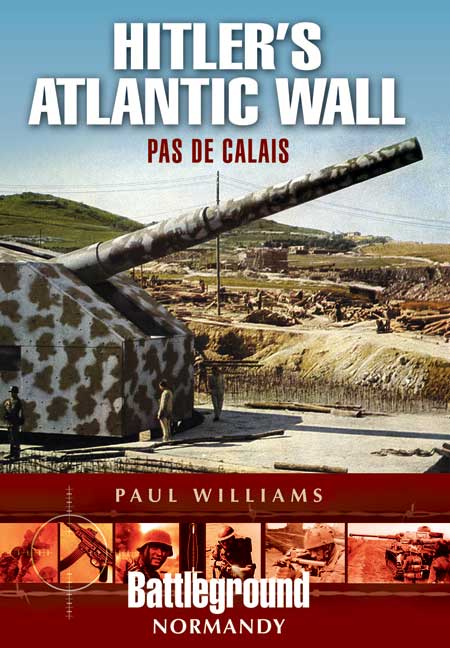 Click here for help on how to download our eBooks
Add to Basket
Add to Wishlist
You'll be £4.99 closer to your next £10.00 credit when you purchase Hitler's Atlantic Wall: Pas de Calais. What's this?
Need a currency converter? Check XE.com for live rates

This well illustrated book describes the massive effort that the occupying Nazi forces put into the construction of the Eastern section of the Atlantic Wall. While the D-Day invasion was unaffected by the fortifications in this area, they still posed a significant threat. This came from the mighty gun batteries (such as Batteries Todt and Lindemann) that threatened Channel shipping and the South Coast of England, and, while isolated from the main Allied advance, the Festung ports of Calais, Boulogne and Dunkirk were denied to Allied use. This was of major strategic significance as the lines of supply were becoming ever longer and more vulnerable.

Using rare archive material, this book takes the reader on a fascinating journey along the coast that Hitler was wrongly convinced would be the site of the Allied landings. Hitler’s Atlantic Wall – Pas de Calais tells the history of how and why the giant batteries were built, the origins of their weaponry and the ingenious engineering and military operations that defeated them finally.

With its 176 pages 'Hitler's Atlantic Wall'...is not a too detailed book. Together with a list in which abbreviations and names are explained, it makes this book an excellent read for those who want to prepare for a trip. With this richly illustrated issue in hand one can make a well informed trip along the remains of the part of the Atlantic Wall along the Dover Strait.

Paul Williams is obviously passionate about this subject, and there is much about the book to like.

Covering an important section of the German defences along the channel, this book shows the effort and ingenuity spent in preparing for the defence against what became the inevitable allied fight to recover Europe. A useful volume for anyone interested in WW2 fortifications or Canadian military history and a handy size for anyone tracking down the remains today.

This new book on the Atlantic Wall covers just one section of the defences in good detail and with the added information required by those readers who intend to undertake a battlefield tour of the surviving artefacts. An excellent selection of photographs and maps reinforces the able text. The publisher has already released over 100 titles in the highly acclaimed Battleground series. This book is a worthy addition and follows the format of providing a volume that is entertaining and informative for those reading at home and for those intending to visit the fortifications.

This well illustrated book describes the massive effort that the occupying Nazi forces put into the construction of the Eastern section of the Atlantic Wall...it tells the history of how and why the giant batteries were built, the origins of their weaponry and the ingenious engineering and military operations that defeated them finally.