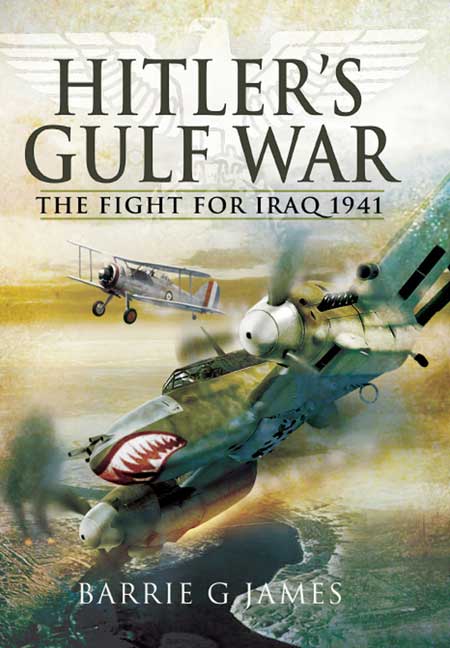 Click here for help on how to download our eBooks
Add to Basket
Add to Wishlist
You'll be £4.99 closer to your next £10.00 credit when you purchase Hitler's Gulf War. What's this?
Need a currency converter? Check XE.com for live rates

During the spring of 1941, on an isolated, indefensible airfield 55 miles from Baghdad a group of poorly armed and outnumbered RAF airman equipped with obsolete aircraft, together with a few soldiers, outfought the much larger and better equipped Iraqi forces who were aided by the Germans and Italians. The engagement would prove to be the first real defeat of the Germans in World War Two.

After an heroic defence, the airfield was finally relieved by a hastily assembled column of trucks, taxis, buses and antiquated armoured cars carrying infantry and Bedouins. The column had fought its way across a 500 mile barren, unmapped desert enduring temperatures approaching fifty degrees C to reach the airfield. In a gigantic game of bluff less than fifteen hundred soldiers supported by the RAF in their obsolete aircraft against odds of twenty to one went on to take Baghdad. They foiled a coup, returned a King to his throne and destroyed Axis aspirations in the Middle East.

This book is based on the research into a wide range of official, academic and public sources. It uses reported American, British, German, Italian and Iraqi dialogue to produce this remarkable account of a thirty day war in Iraq in 1941, how it played out and how it set the scene for Iraq’s turbulent future which has come to haunt the West.

Whilst not being an 'aeroplane' book as such, it gives plenty of background detail to the aircraft taking part and the aerial operations, and is in itself a damn good read, and is recommended to everyone with a interest in history, politics, intrigue and aeroplanes...

Superb.
Just once in a while a history book comes along that reads like a thriller. This is one of those. But the author has done his research and writes with authority. His decision to make extensive use of recorded and published diaglogue is what drives this book out of the ordinary. The story proceeds on a fixed chronology but shifts locale so that the reader is made aware of all the little disparate threads as they are woven. It needs a good writer to hold this together - I wish I were this good.
The only downside - there are no maps. An unforgivable omission. Trying to fathom out the locations of Rutbah Wells, H3 and H4, Fallujah, Mosul, etc in relation to the unfolding events is impossible without a map. Fortunately, I was able to locate a useable map in another publication - not everyone who reads this book will be so lucky. And this book deserves to be read.