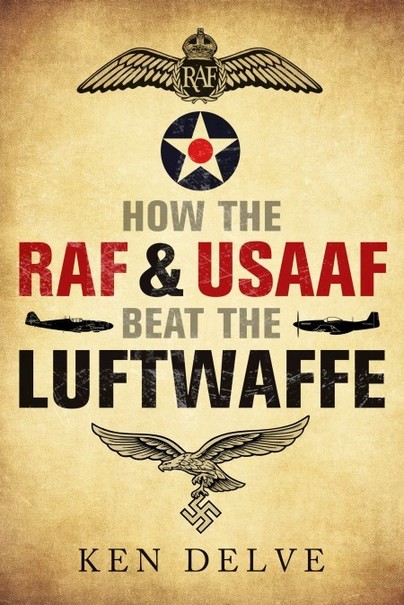 How the RAF and USAAF Beat the Luftwaffe (Kindle)

Click here for help on how to download our eBooks
Add to Basket
Add to Wishlist
You'll be £4.99 closer to your next £10.00 credit when you purchase How the RAF and USAAF Beat the Luftwaffe. What's this?
Need a currency converter? Check XE.com for live rates


Both fighter and bomber equipment and tactics are explored over the course of the war. From the Luftwaffe bombers attacking Britain and the RAF fighters defending against them in 1940, until it turned around in the second half of the war, when Allied 4-engined bombers took up the fight against defending Luftwaffe fighters. I felt this was a very readable and well balanced account of what happened in the air battles over Western Europe throughout WW2.

"This book is useful by putting the history of strategic bombing of Germany and the battle for air supremacy in western Europe in a concise and accurate manner."

"The book’s greatest strength is the plethora of facts and anecdotes sprinkled throughout."

"...the author effectively argues why the Luftwaffe failed."

The question of how the Second World War in the air over Europe was won has been pondered over and written about by many authors and historians. However, Ken Delve takes a very close and much more recent look at how the Luftwaffe was defeated and how specifically the air campaigns by the RAF and the USAAF combined with strategic planning mistakes by the Luftwaffe ultimately led to the decline and eventual defeat of Nazi Germany.
The book begins with a chapter that analyses a 1953 report by the famous German fighter pilot, Adolf Galland. The author agrees with many of the points but also shows where Galland’s lack of impartiality comes to the forefront. Next its a very good chapter on “Readiness, The Period to May 1940.” It’s a fantastic study of how the RAF prepared for the war with a particular emphasis on the 1930s and the British aviation industry. It also looks at doctrine and theories which sadly were not as robust or applicable as hoped. Then its a vivid description of the RAF support during the Battle of France and the decision to only forward deploy Hurricane squadrons and not Spitfire squadrons. The proverbial writing was on the wall and most of the senior RAF leadership and the government knew that the coming battle for Britain would require all the fighters it could muster and in particular the Spitfire squadrons. The Battle of Britain is then analysed from strategic, operational, and tactical levels with many first person accounts from various personnel. Two areas stand out to this reviewer and that is the very detailed and well supported discussion on fighter armament. Cannons versus machine guns and which planes had what along with their effectiveness. The second area is that of command and the famous conflict in tactics namely the “Big Wing” concept espoused by Douglas Bader and AOC 12 Group, Air Vice Marshal Trafford Leigh Mallory versus the more useful theory of sending the squadrons up as quick as possible so as to strike the bombers hopefully before they attacked their targets. This was the more successful tactic used by 11 Group and supported by Air Vice Marshal Keith Park and the head of Fighter Command, Air Marshal Sir Hugh Dowding. This debate is in most Battle of Britain books and rightfully so. But Ken presents the facts and is very succinct in his appraisal of both sides of this story. Next its a discussion on the effectiveness of Luftwaffe night bombing and later the V-1 and V-2 rocket campaign. Finally we come to the main part of the book and that is a very thorough analysis of RAF Bomber Command’s Night Offensive and lastly a look at the Daylight Offensive by the USAAF. Tonnage of bombs dropped, accuracy, Luftwaffe responses, attrition, and other factors are all covered in great detail. The Pointblank Directive which envisaged a day and night offensive against Luftwaffe facilities, airfields, and aircraft factories is discussed as is the Battle for Berlin. Bomber Command morale among increasing losses is discussed as well as aerial gunnery and the massive over-claiming by gunners. The need for long range fighter escort, formation integrity, and early lessons are key features discussed in the Daylight Offensive chapter. The Final Period - Air Superiority and Massive Destruction is the concluding section of the book and appropriately titled.
This book is structured in a logical and easy to read format. I can’t emphasise this enough. Many studies are truly too complicated or dry to read. This book actually uses a great combination of all types of sources to present an analysis that is easy to understand and quite compelling. It includes several tables, many first hand accounts, and a superbly chosen set of black and white photographs representative of both the RAF and the USAAF. The editing is to a fairly high standard. However, I did notice a typo or discrepancy about the top scoring squadron in the Battle of Britain being a Czech squadron versus a Polish squadron. And yes it is still debated as to whether the Polish No 303 Sqn or No 92 Sqn was the highest scoring squadron. Also a photo of an Me 109E-7 is listed as an Me 109F. Otherwise I found no other errors. And it does not detract from the book in any way. Most if not all books have errors and a small number like this is in no way indicative of the high level of research evident in this book. The author made extensive use of the Air Historical Branch at RAF Northolt and it is very evident in the variety of sources within the text. There is a very useful index at the back that will be appreciated by researchers. I highly recommend this book to anyone with an interest in learning how the Allied air campaign in Europe was fought and why it was so successful against the Luftwaffe. It will sit proudly on any aviation or World War Two historian’s shelf.