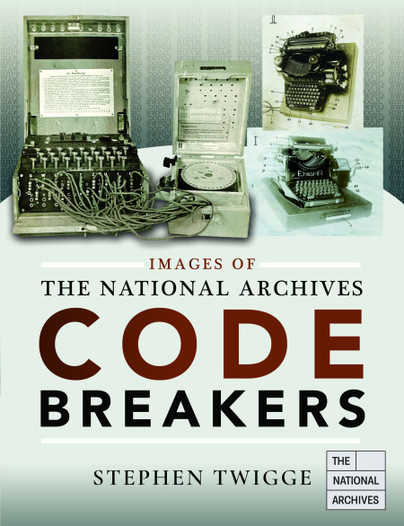 Click here for help on how to download our eBooks
Add to Basket
Add to Wishlist
You'll be £4.99 closer to your next £10.00 credit when you purchase Images of The National Archives: Codebreakers. What's this?
Need a currency converter? Check XE.com for live rates

The book reveals the story of British Codebreakers from the reign of Elizabeth I to the Cold War. It explores the use of ciphers during the Napoleonic wars, the role of the Royal Mail’s Secret Office and the activities the Admiralty’s ‘Room 40’ leading to the creation of the Government’s Code and Cypher School. The main theme of the book are the events of the Second World War and the battle to break the German enigma codes. The centre of Britain’s codebreaking operation was located at Bletchley Park in rural Buckinghamshire and it was from here that a hastily assembled army of codebreakers battled to decipher Nazi German’s secret wartime communications. The deciphered high-level signals intelligence was known as Ultra and had a major influence on the outcome of the war, most notably contributing to crucial successes in the battle for the Atlantic and the D-Day landings in June 1944. The book also reveals the work undertaken in the Far-East and the allied efforts to break the Japanese military cipher code named Purple. The book ends with a re-assessment of the work undertaken by the British code breaker and mathematician Alan Turing and a brief overview of the codebreaking operations undertaken by GCHQ during the formative period of the Cold War.

Nothing quite excites the imagination of communications intrigue as the story of how the German Enigma code machine was broken by those operating in secret at Bletchley Park, headquarters of British World War II code-breaking. Stephen Twigge’s “Images of the National Archives Code Breakers” is a chance for those of us unlikely to get to the British National Archives to glimpse some of the official documents kept there.

Virtually every page of this 128-page book has a photo, diagram, map or document of importance in advancing the ability of the British code breakers of World War II.

The variety and interest of the material provided makes this a most enjoyable book for all, not just those with an interest in intelligence gathering and the dark side of the British state.

A very interesting and useful addition to the corpus of knowledge on code breaking.

For a short overview of British Intelligence work, focusing mainly on the Second World War, this book is a valuable introduction to the labyrinthine world of intelligence, codes and codebreaking. Any person needing more details information is referred to a bibliography in the back listing classic as well as more up to date works on the subject. This is a worthwhile addition to any library.

The informative text is accompanied by lots of illustrations from the National Archive collection. I like this for being able to see documents which are otherwise locked away in the archives and usually only seen by a lucky few who can visit. The story of the Code Breakers and Bletchley Park holds a fascination for many since the story became public, and the recent film, The Immitation Game. A very enjoyable addition to the whole Enigma story.

The subject fascinates me, so I did enjoy this quick and easy read.

Well, this was a book that intrigued me having very much enjoyed Robert Harris’ ‘Enigma’ novel, subsequent film and having visited Bletchley Park once very briskly. On top of those factors, my interest in history and in the tragic life of Alan Turing also drove my interest in this book.

Stephen Twigge’s story telling and fact relaying is clear and concise, and for those curious in the subject matter there is a great collection of reproduced photographs and images of code documents. I like the chapter on Turing in particular, and I also liked the fact that Gordon Welchman, often overshadowed by Turing’s brilliance and tragically short life, also featured in the story telling.

The book starts with where coding began back in the sixteenth century and with the use of coding or ‘cyphers’ to protect the crown from foreign enemies (hence the term decipher). The story telling moves on in a great sequence into the origins of GCHQ, the famous WW1 ‘Zimmerman’ telegram and the manoeuvring around it, and how it brought the USA into WW1. There is much about coding during WW2, enigma, and the various events that contributed to effectively battling the German U boat aggression particularly in the Atlantic. It also dispels the Hollywood myth around the ‘U-571’ story, relating the success the Royal Navy in seizing the enigma machine and code books from U-110, the captain having failed to scuttle it after being forced to the surface by HMS Bulldog..

It is primarily story telling up to the end of WW2 with a short chapter on post war developments. If the text at times gets a bit technical for you, then there's plenty of images to browse, and depending on where your interests lay you don't have to read the whole book or in sequence, I feel. It’s pretty much a must on the bookshelves of 20th century military historians in particular.

This is a superb visual memoir of the equipment used by the WW2 code-breakers. Rather too much written material for my liking, but nevertheless quite fascinating.

This is a really fascinating book from start to finish. This book takes a look at codes, ciphering, breaking the codes and a good bit about where, and the people who did the work. I’ve always admired the people of Bletchley Park, they are like the unsung heroes of World War Two. I even went to visit Bletchley Park last year and the place and its exhibits are amazing and very compelling, somewhere I would definitely recommend everyone goes to visit. In fact I was probably there the best part of one day but could happily gone back for another day. The book takes us on a journey from the days of Elizabeth the first right up through to the Cold War, but probably concentrates most on WW2, where it had its biggest effect.

The book is very well researched indeed by the author Stephen Twigge, and it is written very comprehensively. The book is packed with a lot of photographs and pictures of relevant documents and various machines. Like the Bletchley Park this book is very definitely well worth a visit and I would recommend it to all.

The author, Dr. Stephen Twigge, is a historian at the National Archives, and definitely seems to know what he's talking about. The book is very well researched, moderately well annotated (especially for such a short book), and written in layman accessible language which is never dry or boring. The illustrations and images are the main attraction and the author does a wonderful job of explaining and illuminating without pedantry. I really enjoyed his commentary and got much more out of the illustrations by way of his explanations.

I have been a cryptography nerd since I was a little kid and grew up a maths/coding fanatic, and Turing was an early hero of mine. The author does a decent job of explaining some complex early computer science concepts which Turing was exploring, an overview of Enigma, as well as giving a brief and dispassionate biography of his life and tragic death in 1954. I really enjoyed seeing facsimile pictures of some of Turing's notes and research papers; it gave me a little chill to see notations in his own hand in pen.

The book includes a cross referenced index, bibliography, and notes. Very well illustrated and engagingly written. Four stars. This would be a superlative choice for readers interested in history. I learnt quite a lot and enjoyed paging through and seeing the documents and notes.

This is an amazing book - it's crammed with images of secret documents, code books, Enigma machines and code-breaking paraphernalia - with just enough text to link it all together into an enthralling story of intrigue and double-dealing. Stephen Twigge, the author, is a senior historian at the National Archives who has published a number of books and articles on the Cold War.

The relationship between American and British intelligence in sharing the secrets discovered by Ultra ( the name of the decoding apparatus) and post-war developments with the maintenance of a service now called London Communications Security Agency and detached from MI6 are also analyzed.
The book is extremely interesting with its set of photos of documents (all legible) and the summary of the developments of a system that gave the allied forces victory in the Second World War.

Haunting images, and a great amount of information. I felt like I learned something valuable. The code breakers is a part of history I have always been interested and this book didn’t disappoint.

I love this book as it's well researched and full of facts. I liked the pictures and the documents shown.
I learned a lot about codes and cipher and it was a good read.
Recommended.

I thought that this was a really interesting book and it was crammed full of detail.

I do love history and am reading more and more on the period that covers the Second World War at the moment so this was a book that was right up my street.

I already thought that Alan Turing and his team of codebreakers were fascinating but the book has made me determined now to visit the Bletchley Park site where these discoveries that most likely shortened the war took place as I want to expand my knowledge and it has really sparked an interest for me and it does make me wonder how different things may have been had they not been able to crack the codes and ciphers when they did.

The book is just under 150 pages and it is quite a quick read but I was fascinated as I was reading and I definitely felt more informed after I had finished it.

I found that the book was well written and there was just the right amount of detail, you could very easily have been overwhelmed with some of the terms that would have been used at the time but the author has kept the book concise – highly recommended!!

The book looks at UK Signals Intelligence. It begins before WWI and goes up through the Cold War, but the emphasis is on the activities during WWII. As you might imagine from the name, the book contains many photos... If you have an interest in Bletchley Park, you will find this book of interest.

Very good introduction to the history of codes and ciphers. Many excellent pictures and reproductions of original documents and machines used in code breaking. Focuses primarily on the major code breaking events of WW1 and WW2.

I love history, especially military, so I was really looking forward to reading this. A well-written book with not too much information that you are overwhelmed, but a fascinating insight into codes and ciphers. Totally loved it!