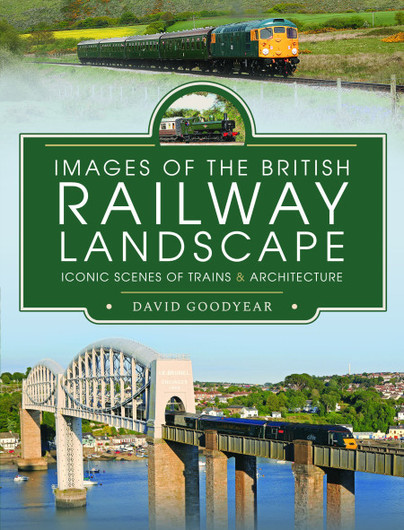 You'll be £15.59 closer to your next £10.00 credit when you purchase Images of the British Railway Landscape. What's this?
Need a currency converter? Check XE.com for live rates

This could be the book for you if you hanker after a new picture volume featuring the contemporary railway scene, both main line and preserved, with well composed and beautifully reproduced images, mostly in bright and well-lit conditions.

As well as having an eye for a good picture, the author clearly possesses high quality camera equipment which allows him to capture all the detail of the trains featured as well as the surrounding landscape, and the results are often stunning.

Local enthusiasts will find a substantial selection of West Country views showing our magnificent coastal and rural scenery, and subjects such as the many photogenic viaducts and bridges, all to good effect. At least half of the book’s 200 pages is devoted to chapters on the preserved steam and diesel locos operating on Britain’s heritage railways, and this reviewer counted at least two dozen fine images featuring familiar locations on the West Somerset Railway such as Bicknoller, Castle Hill and Blue Anchor together with old friends such as S&DJR 7F number 53808 and West Country Pacific 34046 ‘Braunton’.

Although rather spoiled for choice, if this reviewer had to choose one favourite picture it would be that of GWR 0-6-0PT 6430 in ‘auto sandwich’ mode with its two blood and custard liveried trailers, with the train backed by the rolling hills of the Dee Valley between Glyndyfrdwy and Carrog, and resting sheep in the foreground.

The book’s finale is a most evocative shot of Crowcombe Heathfield station at dusk, with the warm glow of the signal box lights brightening the scene.

"...the impression was that it contains not only a very fine selection of photographs, achieving what is claimed in the title by featuring trains in iconic landscapes, but also a great deal of information about each image. The photographer’s foreword also serves to show a real love and understanding of how trains fit into the landscape, something that he shares very effectively with his readers."

"The reader can dip and find something of interest in the wide selection of illustrations."

The range and quality of images depicted over the 199 pages is truly excellent and the captions are informative and interesting. It is worth every penny and is one of the best photo books that has landed on my desk. Highly recommended.