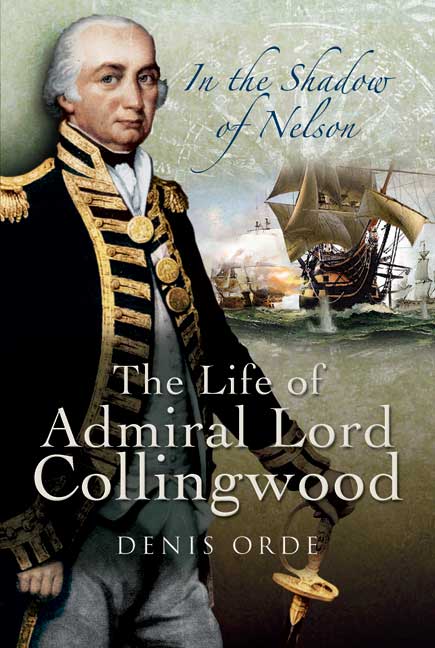 In the Shadow of Nelson (Kindle)

The Life of Admiral Lord Collingwood

Click here for help on how to download our eBooks
Add to Basket
Add to Wishlist
You'll be £4.99 closer to your next £10.00 credit when you purchase In the Shadow of Nelson. What's this?
Need a currency converter? Check XE.com for live rates

Vice Admiral Cuthbert (Cuddy) Collingwood may have been 10 years older than Horatio Nelson but he was Nelson's close friend from the outset. They served together for over 30 years and only at Trafalgar, was Nelson his superior officer. The relationship is all the stranger as their temperaments greatly differed. Collingwood was reserved, austere and shy but utterly competent which was why Nelson's meteoric career was so closely linked to his. Collingwood's reputation was made in battles such as The Glorious First of June (1794) and Cape St Vincent (1797). Collingwood's career survived reverses; he was court-martialled in 1777 by a commander for whom he had no respect. He was acquitted. Collingwood in The Royal Sovereign led the lee column at Trafalgar. After assuming command of the Fleet on Nelson's death he was the author of the famous Trafalgar Despatch that announced the victory and death of Nelson to the Nation. He became Commander in Chief Mediterranean Fleet but was never to return home. He died at sea in 1810. He is buried beside Nelson in St Paul's Cathedral.

This is an excellent view behind the scenes of two men and a navy at war. If you’re interested in the Napoleonic Wars or the Royal Navy in the Age of Sail, this is a great book for you. It provides a different perspective on naval life and fresh insights into the battles fought. You also get to know these two great men and the contributions each made to a grateful nation.

this is a book not be missed

....a fascinating accout of a great commander...Denis Orde has written a compelling account of one of history's major naval figures.

A misleading technical statement on page 2 of chapter 1 led me to read this work unduly critically. A pity because it spoilt my own reading and marred my appreciation of much serious research.
The reader should be prepared for a number of deviations from the principle subject matter into the lives of some of Collingwood's contemporaries whose lives or careers only tangentially touched his own. Some are very interesting but others with remote and complicated family trails, make more turgid reading. However, the book will certainly add valuable knowledge to any student of the period whether nautically biased or not.

Dennis Orde who rose through the legal profession to become a Crown Court judge is the author of In the Shadow of Nelson: The Life of Admiral Lord Collingwood (Pen and Sword Maritime 2008) and a contributor to The New Oxford Dictionary of National Biography.
He is a descendant of Admiral Sir John Orde.

He lives in Northumberland and Oxford.