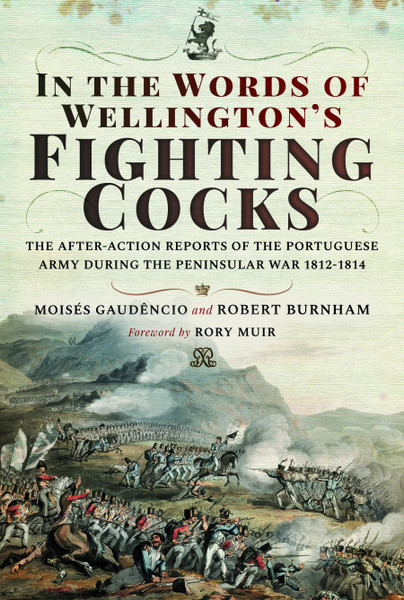 In the Words of Wellington's Fighting Cocks (Kindle)

Click here for help on how to download our eBooks
Add to Basket
Add to Wishlist
You'll be £4.99 closer to your next £10.00 credit when you purchase In the Words of Wellington's Fighting Cocks. What's this?
Need a currency converter? Check XE.com for live rates

"It is THOROUGHLY RECOMMENDED for anyone with a serious interest in the Peninsular War."

Robert Burnham having recently published the first volume in the history of the Light Division joins forces with Moisés Gaudêncio to produce this interesting new source of information on the Peninsular War.

We have a regular and large supply of British sources for the Peninsular conflicts, Bob and Moisés have now added a valuable set of after-action reports written by the commanders of Portuguese battalions, regiments and brigades. The Portuguese army has always been under represented in the histories of the Peninsular. This is a must have for anyone studying the Peninsular War.

"If you love getting your hands on original period material -- translated into English -- here's a fantastic resource for Napoleonic warfare. Exceptionally well done."

Book review highlight:'THOROUGHLY RECOMMENDED for anyone with a serious interest in the Peninsular War.'