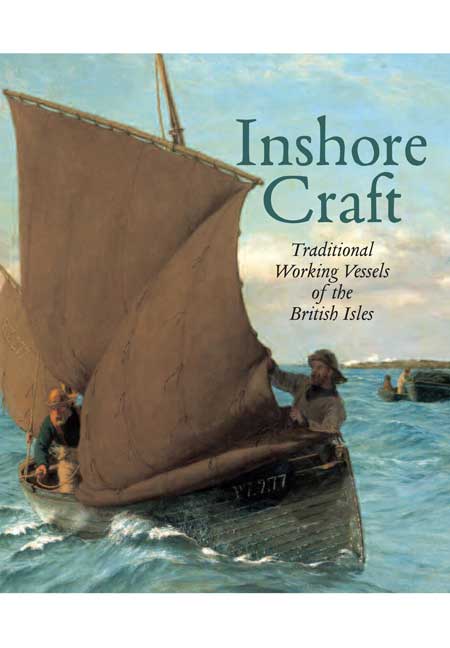 Add to Basket
You'll be £24.50 closer to your next £10.00 credit when you purchase Inshore Craft. What's this?
+£4 UK Delivery or free UK delivery if order is over £30
(click here for international delivery rates)

This comprehensive reference work describes and illustrates some 200 types of inshore craft which once fish and traded, under oar and sail, around the coasts of the British Isles. The types are arranged by coastal area and each is described in terms of its shape and design, fitness for location and purpose, build, evolution and geographical distribution. Details of dimensions, rig, building materials, seamanship and the survivial of examples are given where known, while hundreds of line drawings and photographs show the vessels in their original forms.

This large format compilation originally published by Chatham Publishing in 1997 has now been revised and re-issued and is a worthy successor to Edgar March's 'Inshore Craft of Britain in the Days of oar and sail', and to Eric McKee's 'Working Boats of Britain'. It represents a mammoth undertaking for editor/publisher Julian Mannering, and due credit must therefore first go to him for producing the book to such a high standard both in production quality and authorative content. The team of twelve expert contributors includes several members of S.S.B.R. and also of South West Maritime History Society, many of whom belong to both organisations.
The late Basil Greenhill, as well as contributing a general study on 'Boats and Boatmen', was responsible for the sections dealing with 'Barges of Devon and Cornwall', 'Clovelly Picarooners' and the famous Peggy of Castletown, Isle of Man. In addition he acted as consulting Editor for the whole work. The late David MacGreggor, better known for his unrivalled work on Fast Sailing Ships, contributes a piece on the 'Emsworth Oyster Dredger'. Michael McCaughan and Desmond Toal were responsible for (respectively) the 'Planked Craft of Ireland' and 'Irish Curraghs'. Up in the North, Gloria Wilson covers 'Craft of Northeast England', whilst S.S.B.R. member Mike Stammers writes on 'Craft of Northwest England'.
Adrian Osler contributes 'Craft of Scotland' and Owain Roberts, 'Craft of Walkes'. In the south west, Alison Grant describes the 'North Devon Salmon Boat' and Tony Pawlyn, 'Fishing Craft of Devon and Cornwall'. S.S.B.R.'s Peter Stuckey contributes 'Bristol Channel Pilot Cutters', whilst last but by no means least S.S.B.R.'s Robert Simper covers the 'Craft of the Thames Estuary and Wash', and the 'South Coast'. Individual sources are recorded at the end of each section or chapter, and there is also a general source list at the end of the book, together with a good general index including ships' names.
The narrative is intended for the general reader, being sufficiently detailed to satisfy initial enquiry (and some more) and will inspire the reader to go on to study further bibliography on each subject, where available. The quality of the photographs is superb, both in quality and artistic merit. Many come from the late H.Oliver Hill Collection (he was a member of S.S.B.R. from the early days) and have not been published before. Accompanying most craft types are lines and sail plans, again for the most part excellently printed, and these are an invaluable source to historian and model maker. They been collected from many sources, some familiar, some not. Prominent amongst them are the N.M.M.'s Coastal Craft Collection drawn by Philip Oke.
Without a doubt Topsail readers will want to own a copy of this book if they do not already do so. Take advantages of the publisher's special rate, you will not be disappointed, for the book is a delight to handle and very good value indeed.

One of the reasons why Brittania ruled the waves for so long was that the British developed and nurtured a very strong maritime heritage and culture. One of the pillars of this strong maritime culture comes from a long and strong interest in maritime history and traditions. This large and elegant book is a classic example of this. It is the joint work of a dozen leading maritime historians, museum directors and preservationists. Few other countries would have such a group of so obviously dedicated professionals to call on in this way. This brilliantly illustrated and very accurately written work covers a wide range of the small craft that helped make Britain great.

This book is incredible, and for the historian an absolute necessity.......... An absolutely brilliant book, and one to keep going back to again and again for further information. A cracker of a book.

An invaluable source for book designers, boatbuilders and modelmakers and a wonderful work of reference for the rest of us.

This coffee style table book is an essential reference guide for any expert or lover of these now sadly disappearing vessels.

There surely cannot be a more comprehensive reference work on the subject........

Spanning roughly the century between 1820 and 1920, the book is split into regional chapters written by 12 experts with as much information as one could desire on each craft â€“ which include such delights as the Thames Barges, the Brixham Mumble-bee, Bristol Channel pilot cutters, the Emsworth oyster dredger, the Irish hookers, the Scottish herring boat known as The Zulu, the Welsh Coracle, the Manx Nickey, the Mersey pilot schooner and pre-steam age Mersey ferries.

All this is complemented by page after page of wonderfully evocative historical photographs, supplemented by cross sectional line drawings and period maps of the locations in which the boats were used. Inshore Craft is excellent too on the skills and tools of the boatmen, and the stark economic realties that underlay their livelihood.

An informative and interesting book with a huge amount of illustrations and where available line drawings.