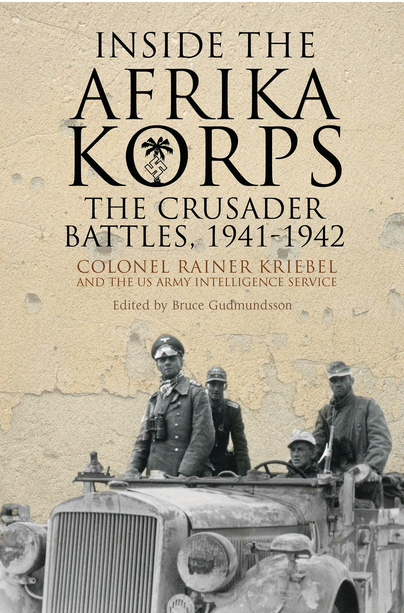 Inside the Afrika Korps (Paperback)

Add to Basket
Add to Wishlist
You'll be £14.99 closer to your next £10.00 credit when you purchase Inside the Afrika Korps. What's this?
+£4.50 UK Delivery or free UK delivery if order is over £35
(click here for international delivery rates)

The German Afrika Korps was an outstanding military organisation that experienced both the height of glory and the depth of defeat in the Western Desert campaign.

This in-depth investigation examines the battles of the Afrika Korps as seen through the eyes of a trained general staff officer under Rommel, and gives a key insight into this formidable fighting force at the height of its powers.

Colonel Kriebel’s debrief undertaken by the US Army Intelligence Service forms the basis of this book, which has been edited and placed in context by an acknowledged authority on the German forces of the Second World War as part of the American military historical programme. His account highlights the German response to the Allied Crusader offensive and the brilliant series of actions that followed, and analyses the potent genius and fatal flaws of Erwin Rommel’s generalship.

Inside the Afrika Korps exposes the secrets of this exemplary fighting force’s success as well as highlighting those weaknesses which led to its eventual defeat.

This study develops a great deal of detail and dives straight into its examination of the challenges presented to the German forces. While a great read for any North African theatre enthusiast the material is geared more towards the study of military science and academic research. Editor Bruce Gudmundsson does a very fine job with the text flow and limiting extensive jargon and formation identities. Colonel Kriebel was an eye witness to the routine and daily situation briefings and his account is fantastic in its unbiased breakdown for the post war project.

The book contains some excellent maps, basic and simple but very to the point being presented without being enhanced for looks. If one is looking for a wealth of new photos this clearly is not that text, no space is wasted with previously published examples and that space is quite effectively used for detailed analysis of planning and field operations. This might chase away the meek but keeps the text at a great price point and as many other books already exist with photographs of the men, machines and terrain this is not and should deter the historical enthusiast.

I would highly recommend the book to any Second World War student or general reader, it is an excellent addition to either a large North African theatre library or a great start for those exploring the topic area. Pen and Sword has produced a superb account which exceeds other existing efforts in reproducing the post war US Army Intelligence studies, which are difficult to balance a reading flow versus situational reports/ops analysis. Additionally, the portrait which emerges in detailing Rommel is highly interesting and unique and make the book a great value in and of itself.

First published in 1999, it is good to see this highly informative work back in print. The war in North Africa was largely unimpeded by a large civilian population and to that end the armies could demonstrate their capabilities. This work by Colonel Rainer Kriebel, who served as chief of staff in the 15th Panzer Division, is his opinions and conclusions of the tough campaign. It covers all aspects from the fighting capabilities of both sides and the problems of logistics. Told by one who was there, it has a greater impact and tells the reader how it was. A worthwhile addition to anyone's understanding of North Africa. Short on photographs and the maps are basic, but the information this contains is extremely valuable reference material.

An in-depth view of the Afrika Korps' campaigns in the desert in WWII, as seen from the German side. This analysis by one of Rommel's staff officers gives the inside story of this powerful fighting force during the highs and lows of the North African Campaign. A must-have for those interested in the campaign.

The book itself is a wonderful mix of historic facts, very interesting background information (both German and allied) on fighting tactics, a separate part on ‘artillery in the desert’ and a running account of the main battles.
I especially liked the last part, on German defensive tactics.

This book successfully captures all essential and vital aspects that matter to the Afrika Korps. Learning how different combat elements e.g. tanks, motorised infantry, artillery, close air support work together from a German colonel is an absolute pleasure.
I wholeheartedly recommend this book as it has a highly detailed section prepared by the US Army Intelligence Service.

Colonel Rainer Kriebel served as chief of staff of the 15th Panzer Division in North Africa, before returning to Berlin to teach tactics at the Kriegsakademie. He then served on the Eastern Front as chief of staff of various army corps and army groups. Bruce I. Gudmundsson is a respected authority on the German Army of the Second World War.