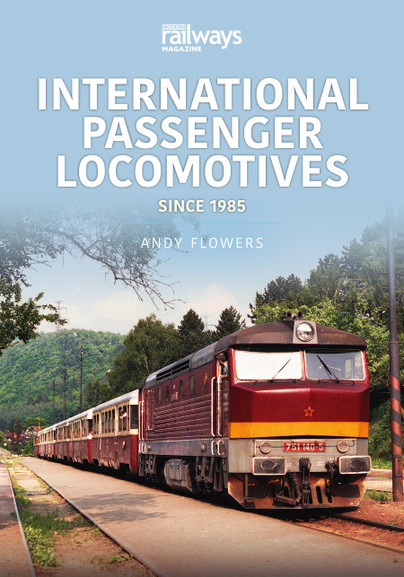 Add to Basket
Add to Wishlist
You'll be £11.99 closer to your next £10.00 credit when you purchase International Passenger Locomotives since 1985. What's this?
+£4.50 UK Delivery or free UK delivery if order is over £35
(click here for international delivery rates)

As traditional locomotive haulage declined in the UK and many enthusiasts’ favorite classes were withdrawn or taken off passenger work, British Rail fans began to broaden their horizons in the 1980s and look at the railway networks of other countries. For many, their first ports of call were the nearer continental European countries, with Germany proving particularly popular as it still featured locomotive haulage over much of its network, even on the smaller branch lines. Ireland also proved popular as their services were almost exclusively loco-hauled. As more enthusiasts traveled abroad and information and number lists became more available, foreign rail holidays became ever more popular, with worldwide favorites including the USA, with its long history of diesel traction and iconic locomotives, and India, with its extensive system and thousands of locomotives. As locomotive haulage declines in the rest of the world, British ‘bashers’ are becoming ever more adventurous with most countries, even North Korea, regularly featuring organized visits for enthusiasts. Today, British enthusiasts are found participating in their hobby all over the world and this book, featuring over 160 color photographs, summarizes some of the more popular destinations and locomotives that they travel abroad for.

Andy Flowers has been a freelance railway photographer and journalist for over 25 years. He has worked for a wide range of UK-based railway magazines including The Railway Magazine, Railway World, Traction, Railways Illustrated, Rail Express and Todays Railways. He also worked for railway publishers Platform 5 as a news editor and features writer and has prepared a number of articles for foreign railway magazines.