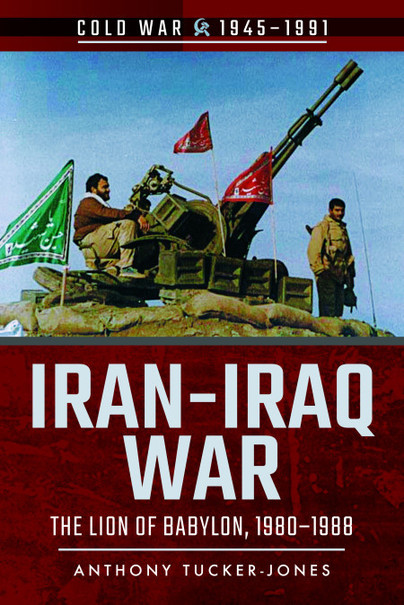 Anthony Tucker-Jones was interviewed by blogger, Joel Wing, at Musings on Iraq. Check out the interview here!

You'll be £4.99 closer to your next £10.00 credit when you purchase Iran-Iraq War. What's this?
Need a currency converter? Check XE.com for live rates

The bloody eight-year Iran-Iraq war is now almost forgotten, overshadowed by the subsequent Gulf War and Iraq War. However, it is best remembered for the unique so-called ‘Tanker War’ which threatened to strangle the world’s oil supplies. At the time Tucker-Jones as a defence analyst wrote extensively on the war and now brings his expertise to bear with this account of a conflict fuelled by festering regional rivalries, the Cold War and the emerging threat posed by militant Shia Islam.

Fought on land, at sea and in the air using some of the most modern weapons money could buy, Western-backed Saddam Hussein’s Sunni Iraq and Shia Iran under the ayatollahs fought themselves to a standstill. Once Saddam’s armoured blitzkrieg had been halted and Iran’s human-wave counterattacks fought off, it became a war of attrition with major battles fought for the possession of Khorramshahr and Basra. Both sides resorted to chemical weapons and bombarding each other with missiles. When the war spilled over into the waters of the Gulf it sparked open Western intervention. Escalating attacks on oil tankers finally culminated in a ceasefire.

Frustration over access to the Persian Gulf by Iraqi oil tankers and an inability to build a strong navy coupled with Iran refusing to pay tolls to use the Shatt al-Arab Waterway set the scene for inevitable conflict. Saddam Hussein, on becoming Iraqi President in 1979, incorrectly assumed that the Iranians would have diminished military resolve after the Iranian Revolution following the overthrow of the Shah. Iraq launched an attack on Iran on 11 September 1980. By 22 September fighting extended along the 720-mile joint frontier.
Chapter 7 details how both countries strove to redress inbalances in their forces through the purchase of incredible quantities of military materiel from the Soviet Union, France, China and others who were more than happy for cash (or oil when that cash ran short). The lack of skills of the personnel using the more sophisticated weaponry often resulted in poor ‘return on investment’. Israel, wishing to preserve a balance of power in the Middle East, requested US support to the Iranians. This was forthcoming in the period 1985-86.
Various aspects of the war are dealt with in separate chapters – Iraq’s incredible tank force, Iraqi fighters versus Iranian anti-aircraft missiles, naval battles, the tanker wars and the use of chemical weapons against the massed Iranian soldiers and Kurds. By 1988 Iran was in no position to continue waging war against Iraq. The losses by the belligerents had been staggering. Both sides then resorted to resolving their ‘Kurdish problem’.
A most generous colour insert contains ten maps and ground, air and naval scenes. Eight Appendices list the Iranian and Iraqi Chain of Command, Orders of Battle and military hardware sourced. A very detailed Index accompanies a good Bibliography.
The subsequent bellicose stance taken by Iraq is made even more amazing when considered that this war was a prelude to Hussien’s invasion of Kuwait on 2 August 1990, and then the rejection of the 16 January 1991 deadline to evacuate or face the Coalition of the Willing’s Operation Desert Storm.

This series is turning into a highly successful and informative series with this new addition, expanding the important coverage of a unique war between nuclear armed opponents and their Allies - Highly Recommended

Iran-Iraq War provides some good insights and emphasizes the huge toll the war took on the two countries. There is a good collection of combat photographs, and color maps in the middle showing where the major campaigns took place. It’s definitely a good introduction to the conflict.

Another book in the Cold War series from Pen and Sword and another interesting one. I think it is fair to say that while many of us can think of the Gulf War in 1991 and the later second round, these tend to overshadow the slightly earlier Iran-Iraq war that took place between 1980 and 1988. The recent addition to the Cold War series is written by Anthony Tucker-Jones who has the personal experience of being a Defence Analyst at the time to tackle the subject so well.