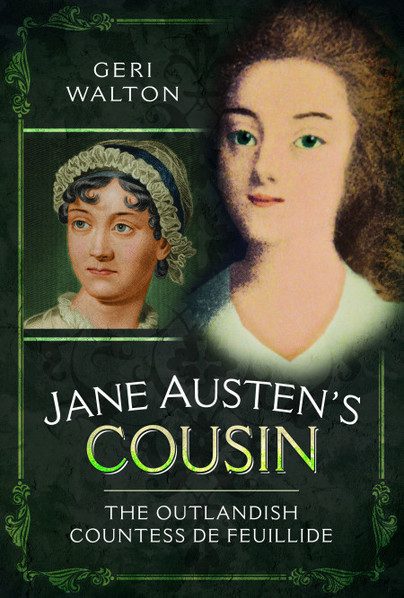 Click here for help on how to download our eBooks
Add to Basket
Add to Wishlist
You'll be £4.99 closer to your next £10.00 credit when you purchase Jane Austen's Cousin. What's this?
Need a currency converter? Check XE.com for live rates

"It is the book’s firm setting of Eliza in both the historical period and in the Austen milieu that makes it a worthy and informative read."

"I’m glad to see Eliza finally getting a biography of her own."

A nice window into the Georgian Era world and another facet into the life of a brilliant English author.

Author Geri Walton like many others explores the times of Jane Austen, through another. Cousin Eliza, is described on the cover as the Outlandish Countess de Feuillide! And so she was!
Eliza was the daughter of Philadelphia Austen, Jane Austen’s aunt. Eliza was brought up in France by her mother, Philadelphia, who ensures that her daughter marries ‘well’, that is to the probably ‘self- styled’, Count de Le Feuillide
Eliza led a rackety sort of life, she was glamorous, adventurous and beautiful. We learn quite lot about her finances, but this fails to account for an expensive lifestyle. She and her husband, the Count went through various vicissitudes, not least the French Revolution and their only child was handicapped. Notably and surprisingly, Eliza was a devoted and selfless mother as well as resilient, independent and brave.
Eliza is undoubtedly the heroine and focus of the story. Geri Walton stays clear of trying to link too many details in with Jane Austen, the author and her family or claiming Eliza had any singular influence on the Austen novels. Family stories about Eliza may well have provided some colour though. It is an interesting and fascinating read.

Another fascinating insight into the life and times of one of Jane Austen's cousins, a French countess, and someone Jane used in her pursuit of perfection to inspire some of her characters. Extremely well written and very interesting subject matter.

Geri Walton tells her story with great enthusiasm embellishing it with many historical details of India and France of considerable interest. Anyone wanting a lively biography of a lively young woman which also gives fascinating details of life in India and France, this book will provide them.

I'd heard about the Countess de Feuillide when reading biographies of Jane Austen and was keep to to find out more about her life in this biography. It's short and sweet, giving lots of information about how Eliza's life and how she inspired characters in Austen's books.

Jane Austen's Cousin is about the illustrious Eliza whose life is described in detail in this fascinating book. Though she was always independent, extravagant and flirtatious, her life was not easy. We are regaled with stories from her birth to death, including her youth, marriages, children including her beloved disabled son, international travels and sorrowful deaths of those around her. She married Count de Feuillide who really wasn't a count.

In a time of massive class and gender divisions and financial hardship, Eliza's life must have seemed splendid in comparison to most. It was to a certain extent. Very few had her privileges. Eliza's personality must have been arresting...no wonder nieces and nephews thought her exotic. However, her emotional losses would have been enough to crush most people. The author describes events going on at the time including war and executions, attempted carriage robberies and hail wiping out crops,

Jane Austen's inspiration largely came from real people, especially Eliza. I like that though the book is about Eliza, her Austen relatives are also discussed. They are integral. I also enjoy learning and putting puzzle pieces together. Jane Austen has been one of my most loved authors since a little girl and reading anything related to her is such a treat! Every family has stories, including this one. Little did they know centuries ago we would continue to be this enamoured...but we are!

Jane Austen's cousin, Eliza de Feuillide, died on 25 April 1813. She was a vivacious socialite who inspired many characters in Jane’s books.