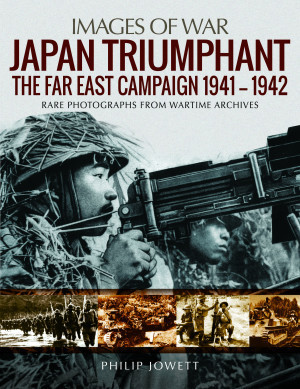 Click here for help on how to download our eBooks
Add to Basket
Add to Wishlist
You'll be £4.99 closer to your next £10.00 credit when you purchase Japan Triumphant: The Far East Campaign, 1941–1942. What's this?
Need a currency converter? Check XE.com for live rates

In 1943 Germany armies occupied most European countries and faced its nemesis Russia. In the east, Japanese armies had swept across the Pacific rim occupying islands 500 miles from Australia to the barren Aleutian Islands in the east; 800 miles from the American base Fort Randell in Alaska. Like a string of pearls, Sumatra, Java, Singapore, French Indo-China, Hong Kong, parts of China and the Philippines, countries abundant in rubber, tin, copper, minerals, and metals. All taken from America and European empires.

As Philip Jowett explains, the armies' successes stretched its logistics and lines of communication. leaving small groups on Pacic islands, isolated. The position grew worse when Japan lost major warships and aircraft carriers in clashes with the American and British fleets. While on land, they were faced with attacks from local guerrilla groups.

The author, Philip Jowett describers the Japanese triumphant landgrab and its defeat. The story, supported by some 200 images is a page turner. Images to be viewed many times and puts the action into perspective. One image which caught my attention, was a Japanese photograph of its troops trailing through the water and Kota Bahru beach at 00.45 on 8th December 1941, 70 minutes before Japanese planes attacked Pearl Harbour, This landing began the invasion of Malaya.


Richard Gough. Historian, Author, SOE Singapore 1941-1942, Escape from Singapore, Outposts of the Empire, The Jungle was Red and Tony Poe, CIA Paramilitary in SE Asia to be published shortly.